'Equivocate': What It Does and Doesn't Mean

'Equivocate' does not mean 'equate,' and 'equivocation' is not 'equivalence'

To equivocate is to say something in a way that can be understood multiple ways, especially so that people will think you mean one thing when you really mean another. It's choosing and arranging your words carefully so that you're not quite lying but so that your listener winds up deceived or misled.

"Did you finish the brownies?" asked Mabel the Cat.

"I make it a practice to never eat the last of anything shared," answered Harry the Dog.

"Then who ate the last brownie?" Mabel inquired.

Harry the Dog is equivocating. He may make it a practice to never eat the last of anything shared, but that doesn't mean that he never breaks that practice. Harry did eat the last brownie, and he doesn't want to admit it. His statement is technically true, but it's deceptive. 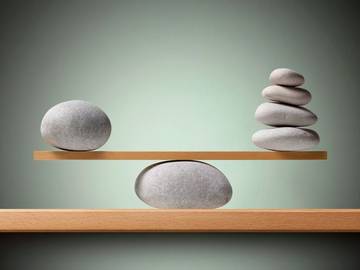 It's all a matter of interpretation.

Equivocate and its adjective and noun relations, equivocal and equivocation, come from Late Latin aequivocus, itself from aequi-, meaning "equal" or "equally," and voc- or vox, meaning "voice." "Equal voice" sounds like a nicely egalitarian kind of notion, but in this case it's conflicting interpretations that have equal voice, which makes knowing what to believe very tricky.

Equivocate and its pals get confused with other equi- words from time to time, like equate and equivalence (and the latter word's synonym, equivalency). For example:

"Pshaw!" Harry retorted. "Brownies are a thing unto themselves! Equivocating brownies with cake is a crime against the very concept of repast."

"I know what I'm talking about, Mabel. The equivocation of brownies with cake is an affront." Harry was indignant.

"But it's the wrong way to say it, Harry. It's the equating of brownies with cake that you think is an affront."

Mabel's certainty carried a certain weight. A sigh escaped Harry's clenched maw. "How about if I say that there is no equivalence between brownies and chocolate cake."

"You can say that," Mabel replied sadly, resigned to no dessert, "but it's not true."

And then there is the wholly unrecommendable phrase false equivocation. Since equivocation is about deception at worst and avoidance at best, false equivocation doesn't make sense. The established phrase is false equivalence. It refers to the identification of unequal things as equal in some important way, especially because of a shared characteristic—even if the degree to which they each possess that characteristic is dramatically different:

"It's true," Harry admitted, "that brownies and chocolate cake are both chocolatey baked confections, but …"

He went silent and no one said anything for a time.

Then, Mabel considered: "But actually, now that I think about it, you're right, Harry. The crumbly, cakey quality of cake is distinct from the moist chewiness of brownies. To say that all chocolatey baked confections are the same is a false equivalence."

"I'm glad you've seen the light, Mabel," Harry intoned, and resolved to make her a fresh batch of brownies for breakfast. "They're hardly the same at all."

Regardless of how you feel about brownies and cake, and regardless of your moral stance on eating the last bit of a shared office baked good (oh yeah, we forgot to mention Mabel and Harry were at work in this short play), do not waver on the use of equivocate: its meaning is solid, at least for now.