Equality means the state of being equal, and equity adds the element of justice or fairness; it’s possible that “equal” treatment does not produce “equity” when conditions and circumstances are very different.

Equity and equality share the same ultimate Latin root, but they split the meaning down the middle (so to speak), carving two distinct nouns that nevertheless do have some overlap in meaning.

The root word that they share is aequus (pronounced \EYE-kwus\), meaning “even” or “fair” or “equal.” That word led to the direct antecedents of our English words: equity is from the Latin aequitas, and equality is from aequalitas. Close resemblance and similar meanings aside, what’s different about these words in English was also different about them in Latin. 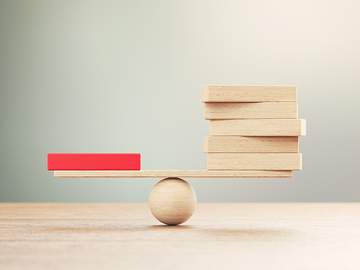 How to Use 'Equity'

Equity is the older word in English, appearing in the 1300s, and it also has a broader range of meanings. It came from the French derivative of aequitas, equité, a word that has clear legal connotations; in French it means “justice” or “rightness,” and those meanings, plus a splash of “fairness,” have come down to us in the English word as well.

A connection with justice is obvious in this sentence from the book of Proverbs in the King James Bible:

Then shalt thou understand righteousness, and judgment, and equity; yea, every good path.

This idea of “justice” connects equity more directly with the law as well: in early modern England there was an institution known as an “equity court” that had the power to rule on cases for which there was no adequate remedy in written law, seeking “natural justice” that could then be taken as precedent. These courts later blended with the legal court system in the late 1800s. It is for this reason that, in the language of the U.S. Constitution, which was written in the context of the British legal system, equity is mentioned alongside law in the first sentence of Article III, Section 2:

The Judicial Power shall extend to all Cases, in Law and Equity, arising under this Constitution

This is another of many apparently redundant pairs in the rhetoric of the Constitution, common in the legal language of the time, including “rules and regulations,” “salaries and emoluments,” and “crimes and misdemeanors.”

Relationship to Property, Shares, and Stocks

A more familiar use of equity that connects more to ideas of “due proportion” or “balance” begins with a legal designation that was originally called equity of redemption; Noah Webster, himself a lawyer, included this meaning in his 1828 dictionary:

equity of redemption, in law, the advantage, allowed to a mortgager, of a reasonable time to redeem lands mortgaged, when the estate is of greater value than the sum for which it was mortgaged.

This use led to our modern meanings of “the value of a piece of property after any debts that remain to be paid are subtracted,” (also the basis of a home equity loan) as well as the meaning “a share in a company” or “a share of the company’s stock.” Indeed, in finance, the term equities is essentially synonymous with stocks.

How to Use 'Equality'

Equality comes from the Middle French word equalité, which descended from the Latin aequalitas, with meanings that are essentially identical across the millennia referring to sameness of amount as well as of status or of shape.

For a time in English, there was a competing form in equalness, now labeled archaic; Shakespeare used both words in his plays. It’s hard to generalize why one suffix would be used and not another, since while -ity derives from the Latin suffix -itas and would seem like a natural fit with Latin-based words, the Germanic -ness sometimes prevails: the noun corresponding to ingenuous used to be ingenuity, but now it's ingenuousness. There was most likely a lot of backing-and-forthing with these suffixes in early Modern English.

Another oddity with this family of words is that we don’t generally use a predictable word like, say, equalitarian. In this case, the intervening French stage of the word’s history is the explanation: in French, the \qu\ of Latin became pronounced as \k\ through a process known as lenition, but some sounds switched instead to \g\, which is how French gave English the word egalitarian. In point of fact, equalitarian does exist in English, proposed by people looking all the way back to the Latin rather than to French; it just didn’t catch on. In modern French, equality is also spelled with a \g\: égalité.

Words used with equality show that sameness of treatment is the most frequent context:

Equity is most frequently used in a financial context:

Gender is the word most frequently associated with equity that is not connected with money, but it is also frequently linked to equality—these terms do overlap in use.

The idea that sometimes sameness of treatment (equality) does not result in proportional fairness (equity) is one way that these words are distinguished from each other, even in similar contexts. Sometimes this distinction is explained with an illustration showing people of different heights using boxes to stand on in order to see over a fence; equality is if all the boxes are identical, but equity is if the boxes are different sizes to permit the people, regardless of their height, the ability to see over the fence.

At least, when opening up a print dictionary, regardless of how thick it is, you’ll have equal access to the pages and the definitions will be written in a manner that is equitable.