You see those dots? All three together constitute an ellipsis. The plural form of the word is ellipses, as in "a writer who uses a lot of ellipses." They also go by the following names: ellipsis points, points of ellipsis, suspension points. We're opting for ellipsis points here, just to make things crystal clear. (And since we're aiming for clarity here, we'll also point out that ellipse is a different word, though, we're sorry, it's sometimes used to mean ellipsis.) 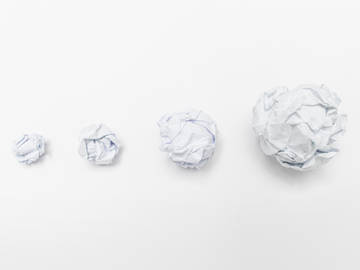 Some thoughts on ellipses are coming…

Ellipsis points are periods in groups of usually three, or sometimes four. They signal either that something has been omitted from quoted text, or that a speaker or writer has paused or trailed off in speech or thought.

That's the basics. Now we'll dig in to how they're used.

1) Ellipsis points indicate the omission of one or more words within a quoted sentence, as in the following example from the Preamble of the U. S. Constitution. Note that they are usually preceded and followed by a space:

Abraham Lincoln's Gettysburg Address ends with a stirring call for national resolve that "government of the people, by the people, for the people, shall not perish from the earth."

Its final words define the war's purpose in democratic terms: "... that government of the people, by the people, for the people, shall not perish from the earth."

3) Punctuation used in the original that falls on either side of the ellipsis points is often omitted, but it may be retained if it helps clarify the sentence structure.

"Now we are engaged in a great civil war, testing whether that nation ... can long endure."

If the omitted part includes the end of a sentence, a four-dot ellipsis may be used, with the first dot being, in truth, a period that follows immediately after the last word.

As the Declaration of Independence asserts, "We hold these truths to be self-evident, that all men are created equal, that they are endowed by their Creator with certain unalienable Rights.... That to secure these rights, Governments are instituted among Men, deriving their just powers from the consent of the governed ..."

4) If the last words of a quoted sentence are omitted and the original sentence ends with punctuation other than a period, the end punctuation often follows the ellipsis points, especially if it helps clarify the quotation.

Workshop attendees are presented with a series of questions beginning "What advice would you offer someone who has experienced ...?"

5) When ellipsis points are used to indicate that a quotation has been intentionally left unfinished, the terminal period is omitted. No space separates the last ellipsis point and the quotation mark.

The paragraph beginning "Recent developments suggest ..." should be deleted.

When I heard the learn'd astronomer,

How soon unaccountable I became tired and sick,

Till rising and gliding out I wander'd off by myself,

In the mystical moist night-air, and from time to time,

Look'd up in perfect silence at the stars.

7) Ellipsis points are used to indicate faltering speech, especially if the faltering involves a long pause or a sentence that trails off or is intentionally left unfinished. Generally, no other terminal punctuation is used.

"Despite these uncertainties, we believe we can do it, but ...."

8) Ellipsis points are sometimes used informally as a stylistic device to catch a reader's attention, often replacing a dash or colon.

They think that nothing can go wrong ... but it does.

9) In newspaper and magazine columns consisting of social notes, local events listings, or short items of celebrity news, ellipsis points often take the place of paragraphing to separate the items.

Congratulations to Debra Morricone, our up-and-coming singing star, for her full scholarship to the Juilliard School this fall! ... And kudos to Paul Chartier for his winning All-State trumpet performance last Friday in Baltimore! ... Look for wit and sparkling melody when the Lions mount their annual Gilbert & Sullivan show at Syms Auditorium. This year it's ...

Ellipsis points are similarly used in informal personal correspondence in place of periods or paragraphing.

We'll be away for the weekend and then back to work Monday ... You're welcome to come for the graduation party at the end of the month.

And there you have it. Now, go forth and with a new command of ellipsis points and a new sense of confidence when you need to collect your thoughts on the page ...