One of the biggest buzzwords at this year's Electronic Entertainment Expo (E3) conference is 4K, highlighted in some major new gaming upgrades. Microsoft unveiled its new Xbox One X console, a more powerful upgrade to its existing Xbox One S console, both capable of outputting 4K graphics. Sony also joined this 4K group with its recently released Playstation 4 Pro. Meanwhile, game developers promoted new console and PC titles using 4K graphics, as well as 4K makeovers for existing games. But what is a K, and why do four of them make a better picture? 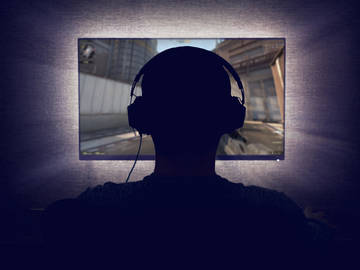 Suddenly you're seeing Pikachu in a whole new light (and resolution)

The K in 4K is taken from the prefix kilo-, meaning "thousand," which comes to English from French, but has its root in the Greek chilioi. You have probably seen kilo- used for units of measurement in the International System of Units (abbreviated SI, from its French name, Système international d'unités), such as kilometer and kilogram. K is often used where typing out "thousand" would take up unnecessary space, as in this example from a 2015 Chicago Tribune headline:

In this case, though, K is more of a marketing ploy than a real number. If you get very close to a video screen, you can see that the image is actually made up of a grid of tiny dots called pixels. The more pixels that can be displayed on a certain screen (in other words, the higher its resolution is), the sharper the picture on the screen can be. One of the higher resolutions available in consumer electronics is 3840 pixels across by 2160 pixels high, for a total of 8.3 megapixels. Marketers call this resolution 4K because it's almost four thousand pixels across--and, presumably, because it sounds more impressive than "3.84K".

The use of K to mean thousand dates back to at least the mid-1940's: the earliest mention of it in our database is a glossary entry in McGraw-Hill's 1945 textbook Basic Electrical Engineering. Two years later, the Radio Corporation of America included it in their own glossary, Common Words in Radio, Television, & Electronics. One early use of the word in a sentence comes from the September 1969 issue of Datamation magazine:

K is also sometimes used in a computing context to mean kilobyte, although it is more common for computer scientists to use kB. Like 4K, this use of K is slightly misleading, as shown by this 1982 citation:

Because of the way computer memory addresses are assigned, the bytes in a computer's memory are often grouped by powers of two, not powers of ten. Early computer scientists borrowed many SI prefixes, including "kilo-", to refer to powers of two that are close to the corresponding power of ten. So a kilobyte can be either one thousand bytes, or 1024 (210) bytes. In 1998, in an attempt to reduce this confusion, the International Electrotechnical Commission (IEC) introduced the term kibibyte to refer to an amount of 1024 bytes. However, this term does not see much use outside the field, and even among computer scientists it is still common to use "kilobyte" to mean 1024 bytes.

In any event, a video game won't benefit from a 4K screen unless the graphics for the game and the device on which the game is played are designed with 4K resolution in mind. Microsoft and Sony hope to drive sales of their consoles by advertising their 4K capabilities, while developers have been hard at work producing games to match. Unfortunately, while a 4K screen can still display images in a lower resolution, the reverse doesn't apply; you won't be able to enjoy the new 4K graphics without buying a 4K display. At least for now, it seems most gamers won't get the whole picture.