'Drought' & 'Drouth' Take Us Back In Time

The word 'drought' once had three common variant spellings. Two of these can still be found today.

Once summer arrives, some parts of the country invariably find themselves deep into a drought. Or, depending on where you are, that might be a drouth. 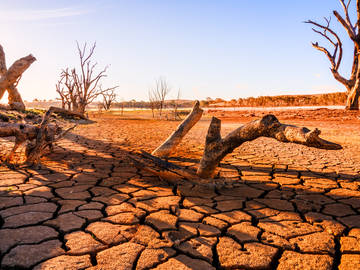 Dangerous, however it's pronounced. Remember to stay hydrated.

Drought first showed up in English over 1,000 years ago to refer to a dry, parched place, like the desert. The word is ultimately from the Old English word for "dry" (dryge); the adjective turned into a verb (drugian, "to make dry"), and then that verb was adapted into a noun (drugath or drugoth, "a dry place"). By the time the Old English noun was taken into Middle English, it had three common spellings: drought, drougth, and drouth.

You may wonder why one word with one fixed spelling (drugian) ended up as a noun with three common spellings (drought, drougth, and drouth). We are accustomed to thinking of English spelling as being independent of pronunciation: after all, rough, cough, and bough are all spelled the same and they don't rhyme, do they? But this is a modern way of approaching English. Back during the Middle English period, English spelling was based entirely on pronunciation.

Middle English was a language that had a large number of dialects, and each dialect had its own way of pronouncing words. Because spelling was based on how words were pronounced, that meant that even simple words, like friend, had dozens of variant spellings: frend, freond, freynd, frundle, freend, froend, and so on. The three Middle English spellings of drought reflected the main pronunciations of the word throughout England.

In time, thanks in part to the introduction of the printing press in England and the widespread distribution of books printed in London throughout the whole nation, spelling began to standardize. We lost the Middle English drougth, but both drought and drouth hung on. Why did drouth hang on? Because there were still plenty of people who pronounced the word /DROWTH/.

Today, drouth still has occasional use, mostly in the American Southwest, Southeast, and Midwest, though drought has substantially more use.

And how do you pronounce it? /DROWT/ and /DROWTH/ are the most current and commonest pronunciations, though you may still near a rare and older pronunciation, /DRAWT/ or /DRAWTH/. This pronunciation was falling out of use by the time our Webster's Third New International Dictionary was published in 1961: that dictionary says that this variant pronunciation is only used "sometimes."