By the time most native speakers of English are adults, they've got irregular verb inflections down. Give/gave/given, bring/brought/brought, take/took/taken, dive...hmm. 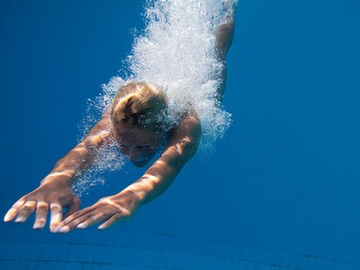 "Dive" suddenly gained a new past tense in the 1800s

Dive is a regular verb whose past tense, since about 1300, has been dived. But in the 1800s, it suddenly gained an irregular past tense—dove. How did that happen, and why, for the love of all verbs, would you complicate something that heretofore has been so simple?

Blame drive. English speakers like their language to make sense, so they create order out of what looks like chaos. With verbs, we do that by sorting them into groups based on their infinitive form. If the past tense and past participle of stink are stank and stunk, respectively, then any verb ending in -ink should, to our minds, follow the same pattern. And some do: drink/drank/drunk and sink/sank/sunk. We apply this to drive and dive as well. The past tense of drive is drove, and so, we reason that dive's should be dove.

But what we want and what we have are two different things. Most of our irregular verb inflections aren't based on the Modern English infinitive form, but the infinitive form of the etymon. Drink, sink, and stink all happen to come from the same group of Old English verbs, which is why they share inflections in Modern English. Wink and think look related to drink, sink, and stink, but they aren't: we can tell by the forms they've carried with them into Modern English: wink/winked/winked and think/thought/thought.

So if dove is a modern invention, you shouldn't use it, right? Some people will tell you that—that the correct past tense of dive is dived. But a survey of the evidence for dive shows that dove is actually twice as common as dived is nowadays in American English, whereas dived is more common in British English. If you're speaking American English, be aware that some people hold to the idea that dived is the only proper past tense of dive, but also know that you may get some funny looks if you use dived in the States.