The same, but different

The Italian language has contributed a number of words to English. There are the musical ones, like piano, and the culinary ones, like lasagna. Ditto ditto. 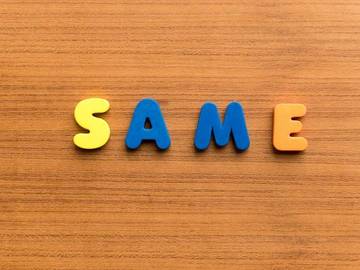 Stop us if you've heard it all before.

That's right: the history of the word ditto starts with Italian: some early 17th century English speakers noticed that in Italian, ditto or detto was used to refer to a thing mentioned previously. The Italians had cultivated ditto/detto themselves, with its origins lying ultimately in Latin dicere, meaning "to say," but English speakers were happy to claim it for their own. So great was the obvious utility of ditto, in fact, that English speakers put the word to use in ways the Italians had not thought to do. Adjectival use quickly followed the adoption of the noun use, and by the second decade of the 18th century, ditto was also functioning in English as an adverb and as a verb.

Noun use (arguably more accurately characterized as pronoun use) dominated, with the English word first functioning mostly in the mundane texts of inventories and invoices, as well as in dry scientific observances like those E. Donovan made in his 1795 The Natural History of British Insects, with the subject of a first illustration being identified as "the natural size of the larva, with its manner of feeding," and the second as "magnified appearance of the upperside of ditto."

But in the 19th century ditto sauntered into popular fiction and settled down for a nice visit:

Mr. Thomas Potter, then, was a clerk in the city, and Mr. Robert Smithers was a ditto in the same; their incomes were limited, but their friendship was unbounded. They lived in the same street, walked into town every morning at the same hour, dined at the same slap-bang every day, and revelled in each other's company very night.
— Charles Dickens, Sketches by "Boz," 1836

"What has Mr. Sweeting besides his curacy?" This question seemed to tickle Malone amazingly. He laughed for full three minutes before he answered it. "What has Sweeting? Why, David has his harp, or flute, which comes to the same thing. He has a sort of pinchbeck watch; ditto, ring; ditto, eyeglass. That's what he has."
— Charlotte Brontë, Shirley, 1849

That, now, is what old Bowditch in his Epitome calls the zodiac, and what my almanack below calls ditto.
— Herman Melville, Moby Dick, 1851

A stout Frenchman, who knew the Emperor, came to indulge his mania for dancing, and Lady de Jones, a British matron, adorned the scene with her little family of eight. Of course, there were many light-footed, shrill-voiced American girls, handsome, lifeless-looking English ditto, and a few plain but piquante French demoiselles …
— Louisa May Alcott, Little Women, 1868-9

Sometimes the context placed the word in its familiar and mundane inventory-and-invoice territory:

Mr. Osborne's butler came to buy some of the famous port wine to transfer to the cellars over the way. As for one dozen well-manufactured silver spoons and forks at per oz., and one dozen dessert ditto ditto …
— William Makepeace Thackeray, Vanity Fair, 1848

Ditto marks—typically inverted commas or apostrophes—appear to date to the late 19th century. The marks and the uses of ditto itself continued into the 20th century, with the verb appearing with slightly more frequency as well:

... one long backless bench of three inch stuff for the haunches, one long ditto a little higher for the elbows, books, and papers.
— Robert Frost, letter, 7 Jan. 1913

On his side he says Yale undergraduates are (a) more gentlemanly (b) more homogeneous (c) less mature by a year, than Harvard dittos.
— Archibald MacLeish, letter, 17 Nov. 1919

—The temperaments at the door, Stephen interposed with, were very passionate about ten shillings. Roberto ruba roba sua. —Quite so, Mr Bloom dittoed.
— James Joyce, Ulysses, 1922

The Bar Association of New York City upheld the principle of the bill but condemned its wording as "so rigid, so needlessly interfering, as to bring about a widespread crippling of the administrative process." Brookings dittoed the opinion.
— Time, 30 Dec. 1940

But as the 20th century progressed, use of ditto changed. What little verb use that had existed largely faded from American and British use (though it continued elsewhere and especially in India), and noun/pronoun use dropped off sharply, with the remaining uses of ditto being adverbial and something else entirely. Adverbial examples first:

On my knees, I was scrubbing Teak Brite into my decks, and flushing them clean with sweat. My knees, as usual, were bleeding, my fingers ditto, cut here and there by the excessive zeal of my rubbing against the sharp metal pieces …
— Geoffrey Wolff, New England Monthly, February 1987

… the Centennial Inaugural March by Richard Wagner, "composed expressly for the occasion," a hymn by John Greenleaf Whittier, ditto, a cantata by Sidney Lanier, ditto, a speech by President Grant, ditto, and a prayer by a certain Right Reverend Bishop Simpson, ditto, who implored the Almighty, somewhat tardily it may have seemed, to guide the officials of the nation that they might "ever rule in righteousness."
— Robert Penn Warren, New and Selected Essays, 1989

Snowman finds himself humming as he goes through the kitchen cupboards. Chocolate in squares, real chocolate. A jar of instant coffee, ditto coffee whitener, ditto sugar. Shrimp paste for spreading on crackers, ersatz but edible. Cheese food in a tube, ditto mayo. Noodle soup with vegetables, chicken flavour. Crackers in a plastic snap-top. A stash of Joltbars. What a bonanza.
— Margaret Atwood, Oryx and Crake, 2003

A year ago, the Miners were pasted by Texas early in the season but had reason to leave feeling all right about itself. Ditto two years ago against Arkansas.
— Bret Bloomquist, The El Paso Times, 3 Sept. 2017

And technology had a contribution to make too: the Ditto machine, an innovation that requires its own aside.

Though now expired, DITTO was a trademark of the Starkey Chemical Process Co., of La Grange, Illinois. Ditto machines existed before the advent of photocopiers as a kind of duplicator involving a fluid process. In this kind of duplicator, whatever is to be copied is typed or otherwise pressed directly onto a master sheet with carbon paper attached to it. When the carbon paper is removed, carbon from the marks made remains on the back of the master sheet; the master sheet is then fed through a machine and moistened with a hydrocarbon fluid that dissolves a thin layer of the carbon deposit onto sheets of paper. For generations of students in the 20th century, worksheets with text in a cool shade of purple, fresh with the scent of the chemical-laden process still clinging to their surfaces, were the norm in their classrooms. So common were the duplicators, in fact, that ditto developed an additional verb use of "to copy (something, such as printed matter) on a duplicator."

The technology is now likely a faint memory to those who actually encountered it, and the word ditto in both its duplicator use and its former dominant use are likewise unfamiliar. And so it is that the words of the language sometimes go: meandering on from one job to another, doing the work required of them by successive generations.