What do we mean by 'the distaff side'?

From flax to the family tree

On Mother’s Day, we often celebrate other people besides our moms: we honor the distaff side of our families. 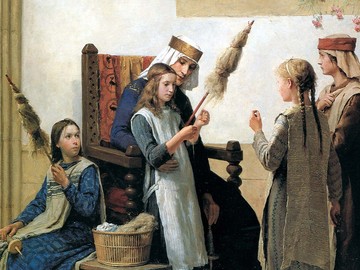 A 'distaff' is a long stick around which flax is wound in preparation for spinning. But the word is also used to describe the mother's line of descent within a family.

Distaff is a noun and adjective that refers to the mother’s line of descent within a family. But that is the most recent use of the word. The earliest use of distaff in English refers to a spinning implement.

The distaff in spinning is a long stick, sometimes forked, around which flax is wound and held in preparation for spinning it. Flax is an incredibly long fiber, and having it stored on the distaff makes it easier to spin. Distaffs can also be wound with wool or tow, but the etymology of distaff makes it clear that flax was the main fiber used with the tool. The word comes from the Old English stæf, which means “staff,” and dis, which means “bundle of flax,” and was first used in English around 1000AD.

Prior to the Industrial Revolution, spinning was primarily women’s work. It, along with weaving and sewing, were jobs of the home. All three supplied an important need for a family or community—clothing—and all three could be done while watching children or managing a household, tasks also generally assigned to women in the pre-industrial age. The implements of this work became associated with this work in general, and by the 1300s, the word distaff had become shorthand for women’s work. Chaucer was the first to use it this way in his Canterbury Tales, and Shakespeare used it in King Lear: “I must change arms at home, and give the distaff into my husband’s hands” (IV.ii.19-20).

It wasn’t long before distaff didn’t just refer to women’s work, but to women themselves. By the 1500s, the noun distaff had come to refer to women or female heirs and ancestors, and the adjective distaff, referring to the same things, came into being. Distaff is more common than you might think; it shows up in print regularly, in settings like this movie blurb:

NEIGHBORS 2: SORORITY RISING. Poor Seth Rogen and Rose Byrne. Having survived frat-boy uproar in the 2014 original, now they have to deal with the distaff side”
—“Summer Movies in Brief,” Boston Globe, 1 May 2016

The women weren’t the only ones to be known by their tools: the male side of a family is sometimes called the spear side or, less commonly, the sword side. This use of spear and sword, however, is based on the far earlier meaning of distaff: neither came into English until the mid-1800s.