A disinvited guest is an uninvited problem

The prefixes used to indicate negation are kind of funny in English. We have a bunch of them: un- and non-, of course, but also in- (and its variants il-, ir-, and im-), dis- (and dys-), and a-. For native speakers, these are all perfectly natural: 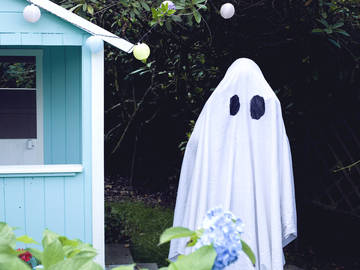 "This party is for ghostwriters—one word. Your invitation was a mistake."

What divides them is their history. Un- is from Old English. Dis- is from Latin, and literally means “apart,” “asunder,” or “in different directions.” It was applied almost exclusively to verbs of Latin origin, hence the idea of “undoing” an action (think of disarm or disinherit or dishonor).

When dis- is used as a noun or adjective prefix, there is sometimes a corresponding Latin-based word formed with con- meaning “with” or “together”:

Dis- is hiding in other words, too: it became dif- in words like diffuse and differ, and sometimes no longer seems like a prefix at all in a word like descant (etymologically meaning “singing apart” or “singing in two parts.”) Dis- combines rarely with words that don’t have Latin origins; the most commonly used words formed with dis- that have Old English base words are:

But dis- and un- do sometimes cross lexical paths—they are occasionally applied to the same word. These words may evolve to have entirely distinct meanings: no one uses disgraceful to mean ungraceful. Dislike means “disapproval” as a noun and “disapprove” as a verb, but unlike as an adjective means “different” or “unequal.” (As a verb, unlike is now used in social media contexts, whether one dislikes it or not.) Other pairs have closer meanings but distinct usage: unused means “idle” whereas disused means “abandoned.” Today, uninterested is usually used to mean “indifferent” and disinterested is used to mean “impartial,” but it’s interesting to note that in the 17th century it was the other way around.

The pair uninvite and disinvite represents a special case. First of all, it’s notable that the adjectives uninvited (“uninvited guest”) and uninviting (“uninviting odor”) are virtually uncontested by the rare usage of disinvited and disinviting. This adjectival use of uninvited is very old:

When all is spent, the last hoste will be a guide and companion vnto him to the next house vninuited: for that skilleth not; but are receiued with like curtesie: in respect of hospitalitie making no difference whether he be of acquaintance or not.
—Cornelius Tacitus, The Annales of Cornelius Tacitus, 1598

For he left no Gentleman, or Lady in or about Cassall uninvited to be at her buriall, and his Feast, and dighted himselfe and all his Kinsfolkes and Servants in mourning attire, thereby the better to carry off the least reflexion or shaddow of suspicion from him of this his foule and inhumane Murther.
—John Reynolds, The Triumph of Gods Revenge, 1635

The use of the verb disinvite meaning “to withdraw an invitation” is also very old:

First he shewed in forme of a complaint how sensible the Archdukes were of an injurie they reputed done unto them in the point of honour by disinviting him againe at the feast of Coronation, upon pretence of competition of prioritie of place betwixt him & the Venetian Ambassador.
—The Earl of Salisbury to Sir Thomas Edmondes, 26 Apr. 1606

And uninvite has been used with the same meaning for nearly as long:

But now for mine own part, I must ingenuously confesse, that though I finde my self more usefully and deliciously entertained with the very least fragments of Bishop Andrews, than with the fullest spread Tables of those new Men, who uninvite the People to be his Guests, and train them up to another Diet.
—Lancelot Andrewes, Apospasmatia sacra, 1657

Nevertheless, both Samuel Johnson in 1755 and Noah Webster in 1828 had entries for the verb disinvite but only the adjective uninvited. Most English dictionaries since Johnson and Webster have followed suit, entering the verb disinvite but not uninvite (the historical Oxford English Dictionary does have a short entry for uninvite), and yet the evidence available to us today shows that both words are alive and well in contemporary English usage.

What I want to do is give them a chance to uninvite me. I'm sure some of the people will feel differently about me now.
—Mario Cuomo, The New York Times 21 February 1987

Rather than uninvite the offending family members, let them know how disappointed you were in their behavior.
—Sense & Sensitivity, Daily Journal (Missouri), 14 December 2016

Occasionally, the two forms appear together, showing uncertainly as to which is “correct”:

It didn't play well enough with Erick Erickson, the head of Red State's wife, that she sort of convinced him to uninvite him or disinvite him.
—Dana Bash, CNN transcript, 11 August 2015

Both disinvite and uninvite are correct. The huge 1934 Merriam-Webster Unabridged (Webster’s Second) had an entry for the verb uninvite, meaning “to annul an invitation of,” but it also bears the label “Rare.” It’s not rare anymore and will be added to our dictionaries soon. Neither word will be disinvited or uninvited to our word-laden table.