When To Use "Discrete" vs "Discreet"

Discrete means "separate," while discreet means "unobtrusive." Both words have the same etymology coming from the Latin discretus which means "to keep separate" or "to discern." An easy trick to tell them apart is to remember is that the "e's" are separated by the "t" in "discrete."

Can you catch the error in this excerpt?

The man puts his cigarette in his ashtray, takes out his cellular phone, and settles in for a chat, ignoring his tablemate completely. The woman and I exchange discrete glances: Les hommes! 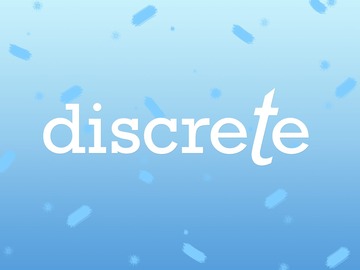 True, yakking on your cellphone while your tablemate sits idly is poor form, but the error sharp-eyed readers will catch is the use of discrete to mean "unobtrusive" or "unnoticeable." Discrete means "separate"; the writer and editor probably meant to use its homonym, discreet.

Here's where things get dicey. Discrete is used a handful of times in the 14th century, then drops out of common use until the 16th century. Discreet, meanwhile, takes off, drawing on the "discerning" sense of its Latin root. But in the 14th and 15th centuries, spelling wasn't fixed, which meant that the word we know of as discreet was spelled as both discreet and discrete. When the modern discrete came back into style in the 16th century, the spellings of the words diverged: discrete and discreet became fixed as separate words, and their meanings remain separate, despite the confusion between them.

Which should you use? Remember that in discrete, the t separates the e's, so discrete means "separate." For "unobtrusive", use discreet.