Or, why you shouldn’t toss a floppy like a Frisbee.

Although disc and disk are listed as variants for something round and flat in shape, each one seems to have a preferred usage. Disc is seen more often in the music industry and throwable objects such as Frisbees, whereas disk is the preferred spelling in computer-related lingo such as floppy disk. 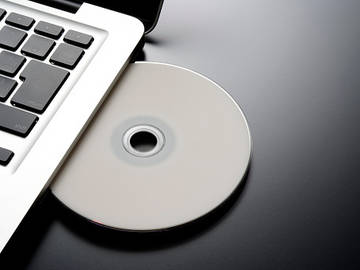 An ode to physical media

In the dictionary, disk and disc are shown as variant nouns separated by or, which means that they occur with more or less equal frequency in edited text. But there are some instances where one spelling is applied more often than the other.

Origins of 'Disc' and 'Disk'

To start from the beginning: the word derives from the Latin noun discus, which means “quoit, disk, dish.” The Greeks spelled this word as diskos, deriving it from the verb dikein (“to throw”). The diskos was a round, flat object that Greek athletes would throw for distance during the ancient Olympics, a sporting tradition that continues in the modern Olympics with the spelling discus.

The word found use as a descriptive word for round heavenly bodies as viewed from the earth, as well as for objects of similar shape occurring in nature (as in the body).

…when we hastened to the shore we could detect only a ripple in the water ruffling the disk of a star.
— Henry David Thoreau, A Week on the Concord and Merrimack Rivers, 1849

His sister, to his spiritual vision, was always like the lunar disk when only a part of it is lighted.
— Henry James, The Europeans, 1878

The different segments of the coccyx are connected together by an extension downwards of the anterior and posterior sacro-coccygeal ligaments, a thin annular disc of fibro-cartilage being interposed between each of the bones.
— Henry Gray, Gray’s Anatomy, 1858

A consideration of the variety in the different groups of barrows around Stonehenge, as, for example, that on Winterbourn Stoke Down, and of the manner in which those of bowl, bell, and disc-shape are mixed, taken in connection with the results obtained by their excavation, shows that these several forms and varieties were in use at one and the same time.
— Archaeologia, Or, Miscellaneous Tracts Relating to Antiquity, Volume 43, 1871

In the one case, the extremity of the muscular fibre is abruptly truncated, or terminates with a perfect disc…
— Jones Quain, Elements of Anatomy, Vol. 1, 1828

These are not spherical, as the name “globules,” by which they have been so generally designated, would seem to imply, but flattened or disk-shaped.
— Jones Quain, Elements of Anatomy, Vol. 1, 1828

The modern phonograph, an invention credited to Thomas Edison in 1877, originally used waxed cylinders, but the flat “gramophone” discs we use today were introduced by Emile Berliner and were in regular use by the turn of the century. Disc record briefly served as terminology in advertising that distinguished the flat records from cylinders.

Will play all makes of disc records, without extra attachments.
— advertisement, Popular Mechanics, 1916

Then I removed from the gramophone the large horn, and sang, spoke, or shouted into the tube at the end of the swinging arm. The disk of the gramophone vibrated, and the needle described minute waves of various forms on the glass plate.
— John G. McKendrick, Nature, 15 Apr. 1909

Preferences between 'Disc' and 'Disk'

The recording industry showed preference for the spelling disc throughout the 20th century, though disk showed some use, and by the 1940s, disc jockey and disk jockey followed analogously. French adopted disc for phonograph records to create its word for a music club, discotheque (originally a “disc library,” following the French word for “library,” bibliotheque). We shortened discotheque to disco, and the 70s music craze known as disco came about from that.

The discrepancy between disc and disk turned up in other areas of popular culture. When the crash of a U.S. military weather balloon fed speculation about flying saucers near Roswell, New Mexico, the local media did not settle on one spelling to describe the object that landed in one rancher’s yard. “No Details of Flying Disk Are Revealed” read a subheadline on the front page of the July 8, 1947 edition of the Roswell Daily Record, while the Carlsbad Daily Current-Argus (July 9, 1947) went with “’Flying Disc’ Turns Out to Be Weather Balloon.”

In the 1950s, Wham-O marketed the Frisbee, whose shape alluded to the flying saucers of Roswell and science-fiction films; flying disc became one preferred generic term for the toy (as in the name of the World Flying Disc Federation), which is today used in games such as disc golf.

The introduction of the home personal computer might have helped to introduce a separation between disc and disk in the public consciousness. The recording industry continued to show preference for the spelling disc when compact discs were introduced as a new digital recording format. Like LP records, compact discs were still round, which might have encouraged the spelling.

Compact discs sound better because they are produced digitally. In a computerlike process, musical sounds are assigned binary digital codes of 0s and 1s that are etched on a 4.7-inch-diameter plastic-and-aluminum disc. When the disc is played, a laser beam picks up the coded "pits" of information, and the circuitry turns them back into analog signals.
— David Pauly , Newsweek, 16 Dec. 1985

Magnetic computer disks, however, tended toward the spelling disk, as in floppy disk. The floppy disk is placed in a disk drive and eventually gave way to what were called diskettes—contained in a hard plastic case, not as floppy, and usually about 3 and a half inches in width. Both were square—and even though both are pretty much a thing of the past, notice that the save icon in many programs still resembles a square disk. (The CD-ROM, modeled on the audio compact disc, is an exception to the spelling pattern.)

There is still a great deal of variation across the board, but it interesting that disc—the spelling variant that ends in the round letter—seems to be preferred for the round objects that play music while disk seems to be the choice for the square computer device.