Use This Incorrectly, and the Grammar Police Will Be after You

Writers face a dilemma these days: use the word dilemma to refer to something that is problematic, and they will be called out by grammarians for misusing dilemma.

Commentators claim that dilemma can't be used to refer to something that is merely problematic: that the proper use of the word is to refer to a choice between two equally unsatisfactory options. Dilemma came into English as a term used in rhetoric to refer to an argument in which an opponent is given two options to choose from, with both of those options being detrimental to the opponent. Very soon after that, it came to refer to any choice that offered two equally unsuitable or unattainable things—the proverbial devil and the deep blue sea, or the rock and the hard place. 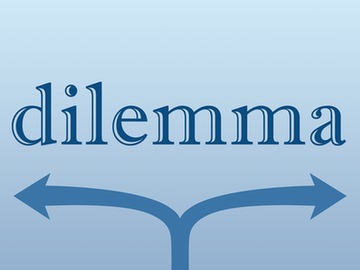 Soon after this second meaning appeared, dilemma's use broadened again to refer to the state of mind marked by someone facing a dilemma: a sense of uncertainty and doubt. Shakespeare used this sense in The Merry Wives of Windsor: "In perplexity, and doubtful dilemma."

That's where things start getting problematic for dilemma. A person who is afflicted with doubt and uncertainty over what to do might not be faced with the classical dilemma (a choice between two equally unsuitable or unattainable options), but just any difficult situation. Additionally, the suitability or attainability of the options presented is primarily in the mind of the person faced with the dilemma. Take a look at this early example:

He is reduced to this doleful Dilemma; either voluntarily, by resigning, to depose himself; or violently ... to be deposed by others.
—Thomas Fuller, The church-history of Britain from the Birth of Jesus Christ, untill the year M.DC.XLVIII, 1655

Fuller has worded his example in such a way that it's clear that one of these options, while not great, is still more suitable that the other: resign and stay alive, or be deposed and get killed. In most choices between life and death, life is preferred, and so this isn't the "correct" use of dilemma.

The word has broadened in use since the 1700s to refer to a problem, and not necessarily a problem that involves a choice between two options. Take, for example, this excerpt found at our entry for dilemma:

What's a pampered 20-something to do when her rich fiancé goes on a business trip and comes back married to someone else? That's the dilemma facing Elle Medina in Nichols's delightfully silly, vivacious debut.
—Publishers Weekly, 28 June 2004

So if your dilemma is whether to use the word or not, you may just find yourself faced with an easy choice after all.