Let us defuse the usage bomb that is 'diffuse/defuse' confusion

Diffuse can be used as a verb meaning "to spread out" or an adjective meaning "spread out" or "not concentrated." It is often confused with defuse which can only be a verb originally meaning "to take the fuse off a bomb" but now usually means "to make less dangerous or tense."

Sometimes people confuse diffuse and defuse. We're here to help you not be one of those people, because we like you very much. 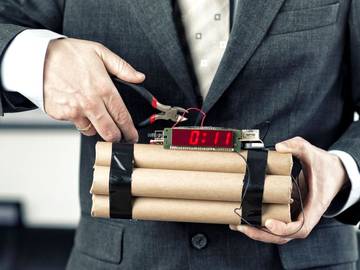 The World's Most Dapper Bomb Technician

First off, only one is ever an adjective: diffuse as an adjective most often means "not concentrated or localized," as in "diffuse lighting" or "a diffuse scent." It also means "being at once verbose and ill-organized," as in "a diffuse explanation that failed to provide any information." It comes from a Latin word meaning "to spread out."

It's when we venture into verb territory, though, that things can get muddled. Diffuse the verb comes directly from the adjective: something diffuse can be said to have diffused or been diffused. That is, it has spread out, or has been spread out, both literally and figuratively. Consider the following undeniably difficult situation:

My roommate's incessantly burning incense diffuses throughout the apartment.

My roommate wants the incessantly burning incense to diffuse more evenly throughout the apartment, but I do not.

My hatred for the scent of the incessantly burning incense is fueling a resentment that is diffusing through the relationship like a painful canker.

Sounds like things are getting tense with these roomies. Perhaps there's a way to, ahem, diffuse the situation.

But that, dear friends, is NOT it. One does not diffuse a situation, unless one is spreading it out, which, we assert, is hard to do. No, the word called for in the sentence above is defuse. It's an entirely different word, although it sounds almost identical to diffuse:

Defuse is a World War II relic, and in its original meaning it is merely a sum of its parts: de- and fuse. It means "to remove the fuse from (a mine, a bomb, etc.)." Its figurative meaning developed quickly after, and is now the meaning most of us are most likely to encounter: "to make less harmful, potent, or tense."

While situations are hard to spread, situations can, with a little luck, be made less tense, which is why when it comes to dealing with situations, defuse is your word.

In summary: Diffuse is both a verb and an adjective, and refers to the spreading of something, or making it less concentrated. Defuse functions only as a verb and means "to remove the fuse from something."