The inclination to confuse censor and censure likely comes from the fact that both describe a restrictive action coming down from an authoritative body. It doesn't help that either word can be used as a noun or a verb. 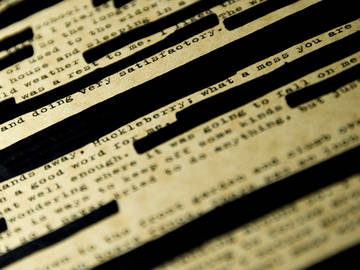 To 'censor' means to remove, block, or interfere with the communication of another. To 'censure', on the other hand, means "to find fault with and criticize as blameworthy."

The best-known meaning of the noun censor is "one who reads communications (as letters) or examines materials (as films) and deletes material considered sensitive or harmful."

We think of censors working on behalf of governments, TV networks ("We're comic dispensers / We crack up all the censors" sang the theme to the 1990s cartoon Tiny Toon Adventures), internet companies, or oneself in the name of choosing one's words carefully. It conjures images of blurred-out nudity, bleeped-out curse words, or redacted text:

I quickly read the whole thing to myself. The date said it had been sent weeks ago. There was no return address and the place where it says where it was mailed from in the postmark was blacked out by a censor. —Graham Salisbury, Under the Blood-Red Sun, 1994

As a transitive verb, to censor means to remove, block, or interfere with the communication of another, with the object of the verb being either the one doing the communicating or the message or idea being delivered:

But at the same time, argue some civil libertarians and free speech advocates, Twitter's very vitality could be imperiled by such a move to censor its users, however vile their tweets.—Harry Bruinius, The Christian Science Monitor, 5 Feb. 2015

Even when cartoonists feel that their commitment to diversity or to the honesty of their artistic vision is worth a few cancellations, syndicates often disagree; they regularly censor gay characters, gay references, and the word "gay."—Jeffery P. Dennis, ACAD: Journal of American Culture, December 2012

Censor is related (via the Latin censēre, "to assess or tax") to our word for the official count of the members of a population: census. In early Rome, censors were magistrates who took the census (which involved, among other things, counting the population and assessing property values) and generally supervised the moral conduct of the citizens.

Censure also derives from censēre and refers to a judicial sentence or official reprimand or criticism. One might censure a member of a parliamentary body or other organization for actions or behavior deemed in violation of the body's rules or spirit of proper conduct. Less severe than an expulsion, a censure doesn't always have an official penalty attached to it (usually, the very act of censure going on the record is enough to tarnish a reputation), and like censor, the word can be a noun or a transitive verb:

Pennsylvania attempted to levy a tax on incoming criminals in 1722 and 1729, but the governor received explicit instructions from London not to enact the statutes. New Jersey, Maryland and Jamaica also tried to follow suit, only to receive the same official censure from London.
—Rachel Christian, History Today, September 2015

A decision by the leader of the Lutheran Church-Missouri Synod to censure a pastor for participating in a prayer service for victims of the Sandy Hook school massacre has reopened old wounds for an often politically divided denomination.
–Tim Townsend, St. Louis Post Dispatch, 9 Feb. 2013

In a way, censuring can work as an act of censorship, using humiliation—or the threat of it—to squash out the voice of a member:

Do not let fear stop you. Do not be frightened by ridicule or censure or embarrassment, do not fear name calling, do not fear the scorn of others. For what is true obligation? Is it not the obligation to pursue a life at peace with itself?
—Tim O'Brien, Going After Cacciato, 1978

Censures in the U.S. government are not pursued lightly. Andrew Jackson was the first President to be censured by the U.S. Senate in 1834, for what was perceived as an abuse of power, when he removed William Duane from his post as Secretary of the Treasury. James K. Polk received a formal reprimand in 1848 when he started the Mexican War without receiving approval from Congress. And in 1902, the two senators from South Carolina, Benjamin Tillman and John McLaurin, were censured for fighting in the Senate chamber.