For all intents and purposes, alternate and alternative are synonymous. Both words date to the middle of the 16th century, and both describe a choice apart from what is first offered: an alternate viewpoint; an alternative suggestion. 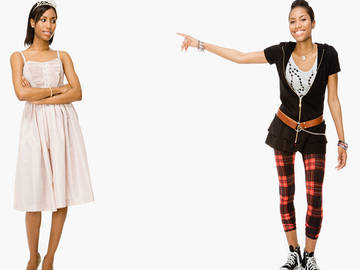 Usage commentators have often emphasized that 'alternate' should be used to mean "occurring or succeeding by turns" and 'alternative' to mean "offering or expressing a choice." But in many cases where choice is involved, 'alternate' is a viable alternative.

Usage commentators, however, have often emphasized a distinction: one should use alternate to mean "occurring or succeeding by turns" and alternative to mean "offering or expressing a choice." Yet a look at the way these words are used makes it clear that things aren't quite so simple.

Yes, the use of alternate to mean "succeeding by turns" is well established:

After being switched to the right at the top of the loop, we started around it counterclockwise. Coal trains are so heavy that they are routed through the loop in alternate directions, to distribute the assault on the track.
—John McPhee, The New Yorker, 10 Oct. 2005

Solid materials like metal are put on the tip, heated and then transferred to the surfaces that are being patterned. Through alternate heating and cooling of the tip, the deposition of the material can be precisely controlled.
—Anne Eisenberg, The New York Times, 23 Sept. 2004

However, "succeeding by turns" appears to have been the original meaning for alternative as well. One of the earliest uses occurs in a 17th century poem, perhaps out of a need for the extra syllable:

Although we do still see use of alternative in the "succeeding by turns" sense, most contemporary examples are found in British publications:

To reduce emissions, cars with odd and even number plates will only be able to drive on alternative days starting from July 20.
–Jonathan Watts, The Guardian, 12 July 2008

While you're less likely to see alternative used to mean "succeeding by turns" in American English, alternate is frequently used to mean "offering or expressing a choice." There are established uses for both that we regularly encounter: a director's cut of a film may feature an alternate ending; a traffic update warns motorists to seek an alternate route.

Many examples, though, use the word simply to mean "offering a choice apart from what is traditional or expected":

She was brought up to know things, to appreciate fine discriminations, and could view an alternate future that was still realizable even at thirty-four.
–Richard Ford, Harper's, June 2012

Of course, the texts are useless if they're not accurate. And local health clinics aren't eager to report gaps in service. So the system has an alternate stream of data: crowdsourcing.
–Belinda Luscombe, Time, 27 Aug. 2012

But in the face of organized and passionate public pushback, that support crumbled. Portland leaders, including a charismatic young mayor named Neil Goldschmidt, suggested an alternate plan. Redirect that money, at least some of it, into this emerging rail renaissance, specifically a 15-mile light rail line from downtown Portland to the eastern suburb of Gresham.
—Ben Wear, The Austin American-Statesman, 10 Aug. 2014

Alternative realistically works for all of these situations as well:

After Hydra's maritime might declined in the 19th century, it turned to sponge fishing as an alternative source of income.
–Lawrence Osborne, The New York Times Style Magazine, 23 Mar. 2014

Like alternate, alternative has its instances where it, rather than alternate, is overwhelmingly preferred. Specifically, it often connotes the kind of option that might be considered apart from mainstream traditions: a homeowner may seek an alternative energy source, such as solar power, rather than a more standard option like oil or natural gas. Alternative medicine seeks to offer remedies not considered part of traditional medical wisdom. An alternative weekly newspaper might cover aspects of city's culture overlooked by its main paper, and alternative music was coined to describe styles of rock influenced by other genres and not usually played on popular radio.

In these cases, alternative is the word to use: people will look at you strangely if you mention "alternate medicine," just as your book club is less likely to meet on "alternative Tuesdays." But in many cases where choice is involved, alternate is a viable alternative.