The common adjective nervous often describes one who is uneasy (as in, he tends to be nervous around birds), apprehensive (she was nervous about venturing into the water), or easily excitable (nervous hopefuls auditioning for a role). 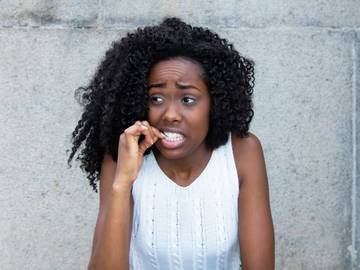 'Nervy' now most often means “showing or expressive of calm courage” or “marked by effrontery or presumption.”

The Latin word nervus referred to muscle or sinew, and the English word nerve, before it came to refer to the bundle of fibers, axons and dendrites that sends and receives messages to the brain, originally appeared in contexts suggesting the idea of muscle:

My fate cries out

And makes each petty artire in this body

As hardy as the Nemean lion's nerve.
— William Shakespeare, Hamlet

Nerves, of course, are used to sense things—pain, pleasure, danger, etc.,—and to aid us in reacting to all sorts of stimuli, but the word nerve is frequently found in contexts pertaining to fear and courage. English offers a range of nerve-based idioms that don’t seems to line up logically. To have nerves means to be nervous, but in other uses, nerve implies courage. To have a lot of nerve means to be bold or impudent. To get (or have) the nerve to do something means to do it in spite of expected objections.

“He stepped in to walk me down the actual aisle and then my dad gave me away at the very end,” Meghan [McCain] explained. “I had nerves right before I was going to walk out, but Jimmy was making me laugh the entire time.”
— Charlotte Triggs, People, 26 Aug. 2018

We stood there hugging and rocking back and forth, and after a while the preacher stopped shaking and I still held on to him; and I finally got the nerve to ask the question I wanted to ask. "Do you think she's ever going to come back?" I whispered.
— Kate DiCamillo, Because of Winn-Dixie, 2000

"You have a lot of nerve," my mother says finally, "to expect to go gallivanting around, to ask for any favors with the report card you brought home. When you start getting marks like your brother Billy, I will think about giving you any special privileges, but for now you'll be home here at ten o'clock if you know what's good for you. …”
— Dennis Smith, A Song for Mary, 1999

It’s this later use of nerve that informs the adjective nervy, which has over time covered the range of nerve-related meanings. Nervy once meant “sinewy” or “strong”; it can also mean “nervous,” but most often means “showing or expressive of calm courage” or “marked by effrontery or presumption.”

A fearless and inveterate gate-crasher, Karger isn’t afraid to pull off nervy stunts, like masquerading as a restaurant lobbyist. In 2006, he waltzed into Vanity Fair‘s exclusive Academy Awards party with a fake Oscar statue and four hot chicks he’d met on the street, claiming to be part of the King Kong special effects team.
— Stephanie Mencimer, Mother Jones, March + April 2010

Black Midi tend to name songs by sonic signifiers more so than thematic relevance … . So, on some level it comes as no surprise that they’ve returned with a single called “Talking Heads,” given that their nervy and diverse approach to rhythm often recalls the iconic art-rock outfit.
— Ryan Leas, Stereogum, 30 Apr. 2019

The use of nervy to mean “nervous” still exists, though seemingly more so in British publications:

He seemed a very nervy contestant. Standing in the soundproof glass booth on the set of “Twenty-One”, NBC’s flagship quiz show during the winter of 1956-57, he’d bite his lip, furrow his eyebrows, blow out his cheeks. “Oh my goodness!” he would sigh, and then pull out a big white handkerchief and mop his face all over, taking care to pat not smear, as he’d been instructed.
— The Economist, 27 Apr. 2019

So the next time you see it, we hope you don't fret.