In the arts, the noun motif refers to a recurring thematic element. It can be a recurring pattern, such as part of a fabric design:

The zombie is draped in a thin white cotton sheet printed with a pink rose motif. He sits in a crudely constructed wooden chair.
Hamilton Morris, Harper's, November 2011 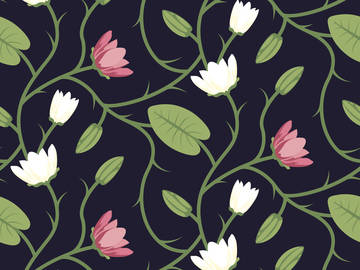 Let the repetition soothe you.

It also occurs in architecture:

Motif can also appear in scientific contexts, to refer to patterns in gene sequencing, among other things:

In broader use, motif can mean simply "theme":

In retrospect, it is now clear that the alien invasion motif in 1950s science fiction movies reflected the Cold War atmosphere of the period.
Paul A. Cantor, Gilligan Unbound, 2001

Apart from giving us a great deal of new information on the Holloways, Ricketts argues very convincingly for a motif of abandonment in much of Kipling's writing, including the Jungle Books, Kim and Captains Courageous.
Elizabeth Lowry, The Times Literary Supplement, 19 Feb 1999

Leitmotif is a term originating from opera, where it referred to a recurring melody that played along with a character or allusion to a theme whenever one or the other appeared on stage. Once more commonly spelled leitmotiv, it derives from the German words for "leading" (leit) and "motive" (Motif).

One of the earliest and most renowned composers to utilize the concept of leitmotif was the German Richard Wagner (1813-1883), known for his Ring Cycle of operas, though the concept was more of a subject for his critics than Wagner himself. (Wagner tended to prefer the German noun Hauptmotiv, or "principal motif," to Leitmotiv).

A modern example of leitmotif occurs in the Star Wars film franchise, such as when "The Imperial March" plays whenever Darth Vader appears on screen.

Like motif, leitmotif sees its own expanded use to mean "a recurring theme":

Conspiracies are a leitmotif of talk radio, even its organizing principle--the bond that unites millions of voters, each in a separate car, driving and listening and, from time to time, pounding the steering wheel in frustration.
James Ridgeway, The Village Voice, 14 June 1994

Ms. Silverthorne suggests in "Sojourner at Cross Creek" that a leitmotif of Rawlings's life was betrayal or the fear of it, an anxiety that developed following the end of her first marriage, in 1933, and lasting the rest of her life.
Jerome Griswold, The New York Times Book Review, 20 Nov. 1988

This use eliminates the distinction between motif and leitmotif, rendering them practically synonymous. Going further, there are even examples of critics prefacing leitmotif with a modifier that functions essentially as the Leit half of the word functioned in the German:

She winds up waiting tables, and that, along with the dishwashing, establishes the book's main leitmotif: time and again she is drawn-pulled, really-back to the world of food and hospitality.
Frank Bruni, The New York Times Book Review, 23 Mar. 2011

So if you want to describe the never-ending parade of parrots on your new apartment's wallpaper, go with motif. And, aesthetics aside, be grateful that you've left the leitmotifs of your old neighbor's blaring Star Wars soundtrack behind.