What's the difference between 'luggage' and 'baggage'?

Synonyms give language richness and texture. Words that are otherwise very close in meaning often have subtle differences. Much of English vocabulary originated from either Germanic or Latin roots, and, as a result, there are many pairs of words that overlap in meaning but are also very distinct in usage: 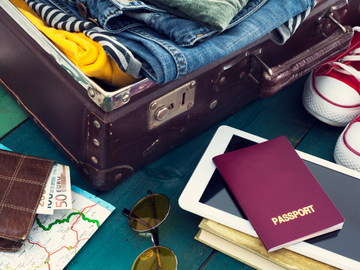 'Luggage' and 'baggage' are unusual in that they're near-perfect synonyms of each other. However, 'baggage' has several additional meanings which 'luggage' does not share.

These word pairs may have different connotations, they may be used in different contexts, or they may express different registers. The natural evolution of language has emphasized distinction and difference rather than sameness and redundancy, so it’s unusual to find two words that have the same meaning and almost no distinction in their principal sense. Such is the extraordinary case, at first glance, of luggage and baggage.

These words have a lot in common. They share the -age ending from French, meaning “action, process, or result of.” Baggage is the older word, and came to English from French (the path of many Latin-derived words) in the 1400s. It’s possible that the bag- of baggage is the familiar English word for “sack to carry things in,” borrowed into French and then back to English again, but it’s hard to know for sure: words like bag and sack, spread through trade and commerce and travel, have origins that are dim in the mists of time. The many ancient traders who came into contact with each other exchanged words between languages before any written records existed to prove their ultimate origins.

We do know that the lug- of luggage is the word we still use to mean “to carry laboriously,” which descends from Middle English and comes from a Scandinavian word with the colorful meaning “to pull by the hair.” (Interestingly, other verbs meaning “to carry” also took the -age ending to become common English words: portage is from the French word meaning "to carry," and carry itself gave us carriage.)

Their histories intertwine in interesting ways: the original meaning of baggage in French was “the equipment of an army,” but Shakespeare uses luggage in this meaning in distinctly military contexts:

Come, bring your luggage nobly on your back
–Henry IV, Part 1

Kill the poys and the luggage! 'Tis expressly against the law of arms.
–Henry V

Airports have signs for both “baggage claim” and “luggage claim” and things like “unclaimed baggage” and “lost luggage,” which is unusual: words for property and equipment tend to be more specific. There is a slight preference of baggage over luggage in American English.

The major difference between baggage and luggage isn’t in the concrete meaning but in the figurative meaning: we say “emotional baggage,” “political baggage,” and “personal baggage” to refer to intangible things that get in the way—but luggage is never used in this way.

Baggage can also mean “a contemptible woman” or “prostitute.” This meaning may have derived from the Middle French word bagasse ("prostitute") and not from bag. Shakespeare used it in The Taming of the Shrew:

It's also in My Fair Lady:

“Should we ask this baggage to sit down or shall we just throw her out of the window?”
“I won't be called a baggage. Not when I've offered to pay like any lady.”

In the vast majority of instances, however, you’d be hard pressed to find two words so well adapted to carry their own weight.