Read on to Become Part of the Dictionary 'Illuminati'

In the beginning, illuminati were shut out, but now they hold the key.

If darkened cathedrals, Gregorian chant, candlelight, hermetic texts, and incense come to mind when you think illuminati, you have the setting half right—in the beginning the word described those on the outside of the church's ornate doors. 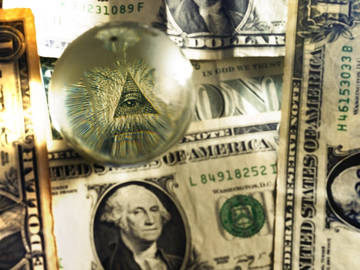 How many dollars to join the financial illuminati?

Illuminati is a word that can be used to mean “persons who are or who claim to be unusually enlightened,” or, simply, “elite.” Sometimes these two ideas of the word’s meaning are combined in context:

The alternative to a world of well-defined nations is not a world of engaged global citizens working for the common good, but a world of isolated individuals and small groups, ruled at best by an elite of unaccountable illuminati, and at worst by authoritarians.
—Bob Rowthorn, Prospect, February 2003

Illuminati (pronounced \ih-loo-muh-NAH-tee\) does have its roots in secret religious knowledge. Since today we use the word to refer to the enlightened or the elite, we might think that its origins lie in a name for those occupying a privileged place in the hierarchy of an established dominant religion like Catholicism. In fact, the truth is the opposite: illuminati was originally used to describe members of groups that were often considered heretical.

The word illuminati itself is the Italian term meaning “enlightened,” which is a translation of the Spanish word Alumbrado, the name for followers of a mystical movement in Spain during the 16th and 17th centuries. They claimed that the human soul, having attained a certain degree of perfection, was permitted a vision of the divine and entered into direct communication with the Holy Spirit. This “perfection” meant that participation in the liturgy, good works, and observance of the exterior forms of religious life were unnecessary for those who had received the “light”—not a position likely to endear them to the official church. Accordingly, the extravagant claims made for their visions and revelations caused them to be relentlessly persecuted (especially during the Inquisition.)

Illuminati was also the name used for members of a different secret society, one that professed deistic and republican principles and was based in Germany in the 1700s. Their ideas reflected the burgeoning intellectual atmosphere of the Enlightenment (they were also called Perfectibilists), and this group was linked with the radical Jacobins around the time of the French Revolution, something noted by George Washington himself, in a letter expressing his disapproval of both groups:

It is not my intention to doubt that the doctrine of the illuminati and the principles of Jacobinism had not spread in the United States. On the contrary, no one is more satisfied of this fact than I am. The idea that I meant to convey, was, that I did not believe that the Lodges of Free Masons in this Country had, as Societies, endeavoured to propagate the diabolical tenets of the first, or pernicious principles of the latter (if they are susceptible of separation).

Illuminati, therefore, was used to refer to different groups at different times, and came to have its generalized (and usually non-capitalized) meaning around 1800. This use of the word is often preceded by a noun that names the group or field of endeavor of a certain expertise such as academic illuminati, technology illuminati, or others:

Cesar [Da Silva]…became the world's youngest Keeper of the Quaich (sort of like a whisky Illuminati) in 2011, making him one of the most informed men of malt in the country.
—Hugh Morris, The Telegraph, 16 May 2017

Bloomberg celebrated the work of Ai Weiwei while flanked by a group of art world illuminati, setting the stage for this body of work to go and inspire people around the globe.
—MENAFN.com, 16 May 2017

Other words referring to special knowledge or expertise are also formed using the Italian plural -ati, such as literati, glitterati, digerati, and even numerati, a word not yet defined in our dictionaries—but might be if it’s frequently used by worderati. If you want to join these word elite, remember when paging through your dictionary, keep your pinkie out.