'A few square inches of home': How the dictionary went to war

During WWII, many books were donated for soldiers as part of the war effort—the dust jackets on new books sometimes requested that the book be given to the Army after reading—but a very practical matter made this act of generosity inefficient. Books come in many different sizes, and most of them were too big for a soldier to carry easily. The solution to this problem was to make a new series of paper-bound books small enough to fit in uniform pockets. Since this size was unusual and speed of production was essential, many of these books were typeset as doubles (the same text twice on a page) and then cut into two smaller books after printing. The resulting books, known as Armed Services Editions, were 5 ½”x 3 ¾” and included everything from classics to mysteries to short story collections. 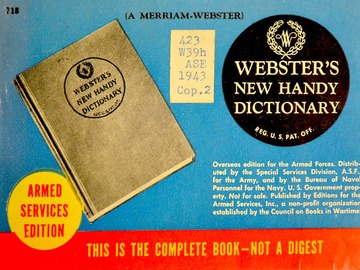 The Armed Services Edition of Webster’s New Handy Dictionary helped to connect those fighting in World War II with the world they left behind.

According to book historian James M. Dourgarian, the scale of this project was impressive and historic:

The series was the Armed Services Editions, a project that was the largest book give-away enterprise in world history. It began in 1943 and ended in 1947. Its achievement staggers the mind. During that small time frame, more than 1,300 titles were produced. A total of nearly 123 million volumes was distributed to soldiers, all thanks to a cooperative enterprise which involved several Army and Navy agencies, the War Production Board, 70 publishing firms, and more than a dozen printing houses, composition firms, and paper suppliers. The agency which guided and coordinated this massive project was the Council on Books in Wartime.

One of the publishers involved in the project was Merriam-Webster. The smallest dictionary published in the 1940s was a hardcover called Webster’s New Handy Dictionary, which had been in print since 1918. (It replaced Webster’s Handy Dictionary from 1877.) The New Handy was chosen as the text for the Armed Services Edition, with a section of new words added to the front of the book. Many of these new words very clearly reflected wartime preoccupations and serve as a time capsule of then-new technologies:

The Armed Services Editions served as the model for inexpensive mass-market publishing in the immediate postwar era. They were clearly significant for the soldiers and sailors who used them: the writer Caitlin Newman has referred to them as “a few square inches of home.” The dictionaries in particular were sought after and important tools for education. In his article, historian Dourgarian quotes the late Professor Matthew J. Bruccoli on the subject:

Bruccoli also has some thoughts on one of the oddest aspects of the ASE series, the dictionaries. No. 717 in the series is Webster's New Handy Dictionary. It was reprinted, as were several other ASE books, but in this case the reprint was immediate. Thus, No. 718 in the series reprints its immediate predecessor. Not only that, these books were reprinted again several months later, although, unlike other ASE reprints, they maintained their numbering. How can you tell the first Nos. 717 and 718 from their reprints, also Nos. 717 and 718? The reprints have a different, later listing of ASE titles on the inside of the rear wrapper. In any event, all the dictionaries are scarce. Bruccoli believes the dictionaries were printed one after the other because they were so popular. This was an era of men of deprived backgrounds, the pre-GI Bill world. And, he says, these books were read to pieces by men who couldn't afford a dictionary, the most basic and useful of literary tools, so they had to be reprinted, again and again.