Where Does the Word 'Delegate' Come From?

From 'ambassador' to 'a representative to a convention or conference'

We're hearing a lot about delegates this election season. But where does the word come from?

A legatus in Latin was an “ambassador,” “deputy,” or “provincial governor.” That word came from the verb legare, which means “to send with a commission or charge” or “to appoint as one’s representative.” The term eventually made its way into English as legate: an official representative of the pope, or, later, an official emissary of any kind. 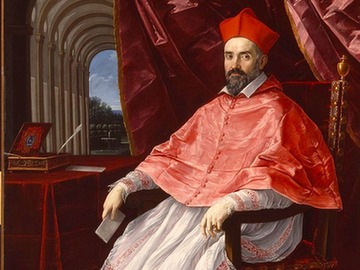 Cardinal Roberto Ubaldino, Papal Legate to Bologna (1627). A 'legate' is an official representative of the Pope; the term eventually acquired the prefix 'de' ("away from oneself") to emphasize the ambassadorial nature of the word. Today, a delegate is "a person who is chosen or elected to vote or act for others."

So how did legate become delegate? The de- in delegate comes from the Latin prefix meaning “away from oneself,” which serves to emphasize the ambassadorial nature of the noun’s meaning. Delegate entered English a few centuries after legate, but with essentially the same meaning. Its use in the contemporary political sense as “a representative to a convention or conference” began in about 1600.

Whether a noun or a verb, the meaning of delegate is simple: a delegate is a person chosen to act in your place, or the act of choosing someone to act for you.