Still Often Used After All These Years

Definition and Synonyms of "Albeit"

It may look a little strange, but its meaning is simple: albeit means "even though" or "although." Here are some typical examples of it in use:

We're going forward with the project, albeit cautiously.

They were loud, albeit not in a rude way.

She appeared on the show, albeit briefly.

We finally found one, albeit not in perfect condition.

It's an excellent machine, albeit expensive. 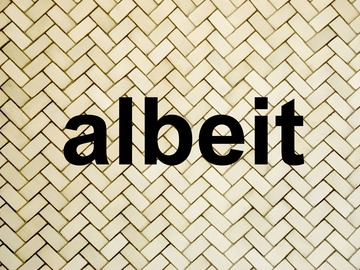 The answer is: none of the above.

Albeit has two close relatives that are far less common but similarly formed. Sobeit means "provided that" or "as long as," and howbeit is a synonym of albeit. They're most often encountered in literature of long ago:

... the heart of his friend cared little whither he went, sobeit he were not too much alone.
– Henry Wadsworth Longfellow, Hyperion: A Romance, 1839

The young creature in pink had a mother in green; and I rather think the latter separated us from motives of policy. Howbeit, there was a general breaking up of the party, while the remnants of the dinner were being put away; and I strolled off by myself among the trees, in a raging and remorseful state.
– Charles Dickens, David Copperfield, 1850

It's impossible to know why albeit retained its usefulness while howbeit and sobeit fell by the lexical wayside. Generations of English speakers simply hung onto albeit long after they'd released the other two from service. Worth noting, though, is that while sobeit looks strange to modern eyes, the phrase it comes from is familiar: so be it is to this day commonly used in various contexts to signal one's acceptance of something—especially something one acknowledges to be problematic, questionable, or less than ideal, as in the following examples:

If I offended some people when I spoke honestly, so be it.

Some may say it was all a waste of time. So be it.

If I have to act like a complete goofball to get the kids to laugh, so be it.

If the new method requires relearning skills, then so be it.