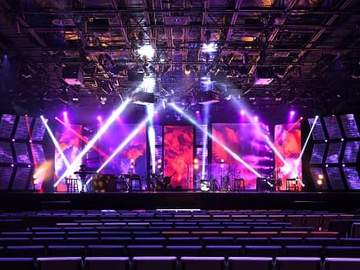 Moat refers to a deep, wide trench surrounding a medieval castle, and maybe a city wall or other fortification, that is usually filled with water. The moat was conceived as a natural method of protection and defense by the removal of earth around the rampart of a fortified place, and in the past its existence prevented such structures as moving towers or battering rams from aiding in invasion. Dry moats or ditches still occur as parts of modern earthworks and architectures, such as sports stadiums.

The etymology of moat is simple: it derives from Anglo-French motte, meaning "mound," "hill," or "bank." Its flow of meaning is as follows. Besides the moats of medieval castles in which the drawbridge is used to cross, the word refers to a channel in a zoo designed to confine animals and to natural features resembling moats, such as the margins of a receding glacier, around the inner cone of a volcano, or on the sea floor at the base of a seamount or beside a coral reef.

Modern Use of 'Moat'

Currently, moat has been used to refer to the empty front rows of the stands in a stadium, arena, or other similar venue designated as a reserved space for media personnel and that creates distance not only between that group and the spectators but from the teams, performers, and other players. It also designates the physical-distancing space in smaller establishments between a stage and patrons and between tables. This use harkens back to the word's original meaning referring to a form of defense; in this case, the defense used is physical distancing to slow the corona pandemic, as these examples demonstrate:

The first seven rows of the stadium were left empty to create a "moat" to prevent any transmission of the virus between fans and players.
— Rory Carroll, Reuters, 10 Sept. 2020

Sideline reporters for both television as well as radio aren't allowed on the field this year per NFL rules. Instead, they're positioned in the first row of stands aka a section dubbed "the moat." They're free to pace the elevated "sideline" and they can make the trek to the opposite sideline's moat as well, although getting there isn't always the easiest....
— Hayley Elwood, Chargers.com, 25 Sept. 2020

There are only 17 tables, with reduced capacity from 700 to 92 to ensure social distancing. Moran called it "the moat" between the tables and the stage. "When you walk into that big, 10,000-square-foot room and see more than half of the tables removed, you get a sense very quickly that you're in a different, safe environment," Moran said. "I believe there's an audience who wants to hear live music and is willing to join us for those kind of intimate performances."
— Jason Fraley, WTOP News (Chevy Chase, Maryland), 7 Oct. 2020

Keep in mind that the media can be in the moat, but spectators who try to cross will be escorted out, and if in an establishment having small moats between tables or a stage, approaching either is not recommended (according to current guidelines).