English: always throwing a wet blanket on your assumptions

English is full of tricky near homophones, and some love nothing more than to catch others using them incorrectly. But since this is English we're talking about, it's not always as cut and dried as most of us think. Enter tamp down and damp down. 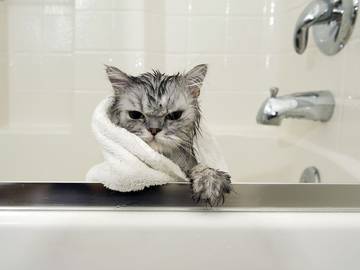 Like hone in and home in, the history of tamp down and damp down is a bit convoluted. The older verb is damp, dating in written use back to the 1300s. Contrary to what one would think, its earliest meanings were not literal, but figurative: damp was used first to describe choking someone (as if with noxious gas), and then later for stifling or deadening something:

Their own matter is damped, and destroyed in the word of God as if it were in poison.
— Lady Anne Bacon, J. Jewel's Apologie or answere in defence of the church of Englande, 1564

In time, dampen became the verb that was more often used literally, and damp continued its figurative tromp through English for several hundred more years.

Tamp as a verb first showed up in written English in the early 1800s. It was used specifically in mining to refer to both putting an explosive charge into a bore-hole, and to packing the bore-hole with clay or earth before detonating the charge.

A man engaged in blasting was in the act of tamping the blast, when the spindle, as is supposed, struck some part of the rock and produced combustion and explosion.
— The Wyoming Republican and Farmer's Herald (Kingston, PA), 13 Sept. 1838

By the mid-1800s, tamp was being used more generally, and more and more often accompanied by down:

In the lower half the pattern or model is placed, the frame then filled with moist sand even to the upper surface of the pattern, a light sprinkling of dry sand is then spread on the surface—the upper frame placed over it, more moist sand filled in and carefully pressed or "tamped" down, and the two frames are then separated...
— Hartford (CT) Courant, 5 Dec. 1848

Around the same time, however, the verb damp was picking up another figurative use that referred to depressing or reducing something—and that sense of damp was also often used with down:

It is very vexatious that there should be anything to damp down the enthusiasm which so delightful a demonstration as the late Caxton meeting appears to kindle in every British bosom.
— The Observer (London, England), 21 June 1847

At the same time, the U.S. commandant in Berlin said the Russians have created a potentially explosive situation in Communist Berlin by bringing in two mechanized divisions—25,000 troops—to "tamp down" the people.
— United Press wire in Anniston (AL) Star, 20 June 1953

Tamp down was used here to refer to subduing a group of people by force, but under the influence of the figurative damp down, tamp down began to also refer to lessening or reducing something:

This could meant that the Soviets might, before long, decide to tidy up some of their relations with the United States—say, in West Berlin and Cuba—and thus tamp down some of the worst tensions.
— Roscoe Drummond, Lawton (OK) Constitution, 17 July 1963

Tamp down began to see an increase in use around this time, and damp down saw a decrease. Tamp down is now used both literally ("tamping down the dirt around the pitcher's mound") and figuratively ("tamping down rumors of staff cuts"). Damp down still appears in print with its extended "lessen or stifle" meaning, but it's now unfamiliar enough that many people assume it's an eggcorn for tamp down and therefore mark it somehow as not-quite-normal:

A Pentagon spokesman sought to "damp down" speculation that the United States was considering use of nuclear weapons in any military confrontation with Russia over control of the Persian Gulf region.
— Associated Press wire in Arizona Republic, 22 Feb. 1980

We're very sorry if this information tamps down your annoyance at damp down. Or vice versa.