When Is ‘Cuffing Season?’

Something to do during the cold, dark months.

Cuffing season refers to a period of time where single people begin looking for short term partnerships to pass the colder months of the year. Cuffing season usually begins in October and lasts until just after Valentines Day. The use of the word cuff references handcuffs, but is slang in the same vein as "hooking up" or "getting hitched." 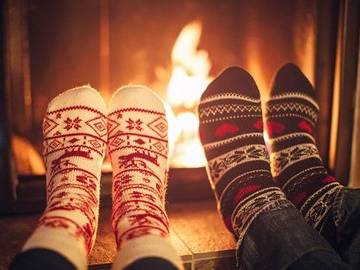 It's cold out there.

What is cuffing season?

According to most lifestyle writers, it’s the time of the year when the weather starts to turn cold and single people begin the active search for romantic partners in the hope of having someone with whom to ride out the colder, snowier, bleaker months. Typically those months run from October through March—though as always with such things, your mileage may vary—but the season is generally regarded as culminating with Valentine’s Day.

“Cuffing season is when people start to want to be tied down in a serious relationship,” says licensed clinical psychologist Dara Bushman, PsyD. “The cold weather and lack of outdoors and sunshine causes singles to become lonely and desperate.”
— Taylor Andrews and Julia Pugachevsky, Cosmopolitan, 18 June 2019

It makes sense, then, for cuffing season to be impacted by the weather. It seems like the change in seasons are only denoted by the date now. It is cold into spring, it is warm well into fall. How could cuffing season survive when the true seasons of fall and winter are not?
— Anna Iovine, Mashable, 11 Dec. 2019

Cuffing season is the period during the autumn and winter months where finding a boyfriend or girlfriend is suddenly a lot more appealing. It officially starts in September when the temperature turns, but it's around now people are putting in a last-ditch effort to be paired up for the colder months if they haven't found a partner yet.
— Lindsay Dodgson, Insider, 10 Nov. 2019

Putting the "Cuff" in "Cuffing Season"

The act of seeking out casual romantic relationships certainly isn’t new, but cuffing season might be original in ascribing that desire to the weather. The “cuffs” in cuffing season allude to handcuffs, which might or might not sound like your idea of fun. The notion isn’t as kinky as what you may be thinking, though: it’s simply the idea of being connected or tied to another person, an idea expressed in similar phrases like hooking up or get hitched.

The earliest recorded print uses of cuffing season date from college newspapers in 2011, with cuff preceding that as a verb with origins in African-American vernacular as something close in meaning to hook up. The term saw significant use as college jargon before ever seeing print; its use in the title of a 2013 song by the rapper Fabolous might have helped to introduce the phrase to the public at large.

On top of that, the popularity of dating apps like Tinder, which come with their own winking terminology (e.g. swipe right), gave cuffing season a platform.

Other phrases have similarly arisen. Using the name of a popular home subscription streaming service, the phrase Netflix and chill has taken hold as coded language for time devoted to relaxation at home with a companion (as opposed to going out on an actual date) with room for extracurricular activities later.

Which sounds like fun, sure. But aren't there some nights when it would be just as nice to curl up with a good book?