At the Root of ‘Cubicle’

On the shape of offices and office politics

Although the quintessential office space is a small square, cubicle actually has no etymological relationship to cube. The word is related to the Latin word cubiculum and the verb cubare which means "to lie down." The first cubicles were actually private spaces for sleeping, such as within a dormitory, and weren't always square in shape. Thus the association with cubes, while logical, is purely coincidental.

The cubicle is a mainstay of late 20th-century office culture. Lampooned in films like Office Space, they have been compared to veal pens for livestock, leading some companies to consider phasing them out in favor of open-office floor plans. You might even be sitting in your office cubicle as you read this article during some downtime in your workday. But how did we come to call them cubicles? 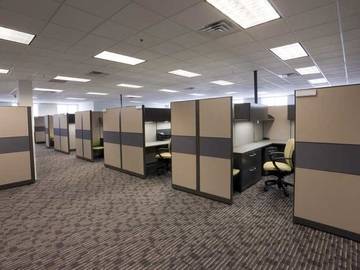 This is going to be great information for the water cooler.

In cubicle one hears the word cube, which makes sense, since the usual layout of a workspace and its demarcation by partitions often results in the space looking like a cube. The short form cube is naturally used quite often in place of cubicle:

Aside from my actually liking the clock, another funny thing happened after I set it up: Many of those coworkers who initially passed on it came over to my cube to compliment it.
— Anthony Rotunno, The Strategist, 25 Sept. 2019

Continuing the analogy of office workers to livestock, the term cube farm refers to an office in which employees are set off by cubicles:

When he moved to a windowless space smack dab in the middle of a cube farm, he bought a lamp that mimics natural light and says it boosted his mood.
— Laura McMullen, U.S. News & World Report, 8 Apr. 2015

Originally, cubicles weren’t intended for work, but for sleep. The Latin root noun cubiculum derives from cubare, a verb meaning “to lie (down).” (To incubate is to lie upon an egg in order to provide the warmth needed hatch it; a concubine is one with whom you lie down, essentially.) So as early as the 15th century, a cubicle was a sleeping chamber set apart from others, as in a dormitory:

Mr. Trelawny had ordered a sleeping-carriage for our party; as soon as the train had started we all turned into our cubicles.
— Bram Stoker, The Jewel of Seven Stars, 1903

Cubicles and the Office

Over the years, cubicle came to refer to other types of separated compartments, usually intended to allow for some kind of privacy, whether for study or bathing or changing one’s wardrobe—as well as, yes, keeping farm animals separated. As the design of office interiors graduated from rows of secretarial desks (like on Mad Men) to spaces partitioned off from each other, cubicle came to be the preferred term for such spaces. However, as Whet Moser at Quartz notes, the original design of the cubicle was not the basic shape we know today:

In the 1960s, Robert Propst, who worked at the furniture design giant Herman Miller, envisioned the Action Office plan as a way companies and employees could have it all. The cubicle, originally, wasn’t a cube: it was a modular system of desks, walls, and other furniture that gave workers some semi-private, customizable space yet left them open to their co-workers.
— Whet Moser, Quartz, 8 Feb. 2019

So where does that leave cube? That noun also comes from Latin—the root cubus, which is derived from the Greek kybos, meaning “die” (as in one of a pair of dice).

But because of its semantic connection to cube, you might instantly assume that cubicle is simply a “little cube” or an alteration of cube. And it is logical to think that when cubicles became homogenized into the limited squared-off shape we recognize today as a regular part of office décor, the resemblance of the spaces to cubes might have encouraged the terminology along. The letter chain –icle has a history that encourages an interpretation of smallness: think of particle as a very small part of something, or icicle as a narrow strip of ice melting away. There are also a number of terms used in anatomy that were diminutives (a form of a word indicating small size) in Latin: follicle (literally, a “small sac”), cuticle (a small piece of skin), and vesicle (a small body part resembling a bladder).

But the original cubicle, amazingly enough, has no etymological relation to cube. You should save this bit of trivia for later, when you want to bug your co-worker.