It depends on what you base your decision.

Criteria is typically a plural noun referring to standards on which a judgment can be made. Its singular is criterion, but evidence shows that criteria is frequently being used as a singular as well as a plural, much like data and agenda and their lesser-used singulars datum and agendum.

As English borrows words from Latin and Greek, we sometimes must adjust our grammar to accommodate how those words were used in their original languages. This is particularly true with regard to plural nouns.

Early English grammarians preferred to preserve the traditions of the classical languages, so Latin- and Greek-derived nouns often retained their Latin and Greek plural forms in English. This practice was retained particularly for academic and scientific writing. So the plural of radius is radii; appendix is appendices; genus is genera; bacterium becomes bacteria. 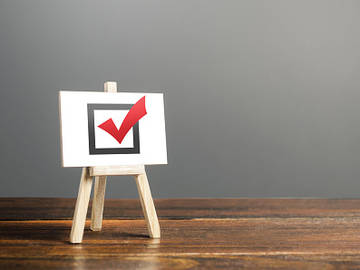 Checking all the boxes. Or just the one.

But in many other instances, the Latin or Greek plural was abandoned for the standard English plural. The Latin plural of gymnasium is gymnasia, but you would almost never see it pluralized as anything other than gymnasiums in English.

There are numerous counterexamples. One is criterion, a word whose Greek plural is very much alive: criteria.

Usage of 'Criterion' and 'Criteria'

Criterion is defined as “a standard on which a judgment or decision may be based” or “a characterizing mark or trait.” The former of these is the meaning in question when one says, “An important criterion for choosing where to dine is that there are vegetarian entrees on the menu.”

When I was dating, in my twenties and early thirties, my chief criterion in a romantic partner, after a sense of humor, was the ability to help me spot crises in advance, and lead us and our future children out of them.
— Pamela Druckerman, The New York Review of Books, 12 May 2020

But the more serious problem may have been that fever of over 100 degrees was used as the one overriding criterion to determine whether a sick inmate required medical attention.
— Tim Golden, ProPublica, 24 June 2020

Possibly because so many decisions are based on more than one factor, the plural criteria tends to show up more frequently in English than its singular form. In these instances, criteria typically follows the construction of a standard plural.

Athletes are judged on a number of different criteria, including difficulty, execution, landing, and amplitude.
— Justin Peters, Slate, 18 Feb. 2018

The law codifies the so-called ABC test, which sets three criteria to determine whether a worker ought to be classified as a contractor or an employee.
— Eoin O’Carroll, The Christian Science Monitor, 2 July 2020

If they’re still adapting—or if, as in some cases Gurenlian says the ADHA has been informed of, they’ve chosen not to change their practices—consider putting your visit on pause until changes have been made. … Even if all those criteria are met, not everybody is ready to return for routine dental work
— Kat Eschner, Popular Science, 30 June 2020

On infrequent occasions, the Latin plural is eschewed for the standard English –s plural:

Given the increasing rate of cyber threats, cybersecurity has become one of the major business criterions every company is focusing on, irrespective of industry or geographic location.
— Yahoo! Finance, 8 Jan. 2020

'Criteria' as a Singular Noun

There is evidence that criteria is following the pattern of other Latin- and Greek-derived nouns that have shown a preference for the plural form in constructions that otherwise would seem to call for the singular (such as a singular article or being a subject paired with a singular verb such as is):

Zenz concludes that the actions taken by the Chinese government meet at least one criteria of the United Nations definition of genocide, namely the prevention of births within the targeted group.
— Zachary Evans, [National Review](https://www.nationalreview.com/news/china-forces-widespread-birth-control-on-uighur-population/, 29 June 2020

It appears Arizona may no longer meet one of the key White House reopening guidelines. One criteria calls for a two-week downward trajectory of cases or a two-week downward trajectory of positive tests as a percentage of total tests.
Arizona has yet to have a decline in documented cases, so it relied on the latter criteria.
— Stephanie Innes et al., The Arizona Republic, 4 June 2020

The Dispatch reached out to Ginther’s office through Davis to ask what criteria is being used to determine what is being posted and what isn’t, as well as how long the policy would last and why Ginther wants to control what the division—which has its own media relations team — is posting.
— Bethany Bruner, The Columbus Dispatch, 30 June 2020

According to guidelines just released by Secretary of State Jay Ashcroft, voters who are incapacitated due to illness or physical disability, including caring for a person who is incapacitated or confined due to illness or physical disability, will not be required to have their ballots notarized. … Franklin County Clerk Tim Baker said the new criteria is confusing and will not safeguard against possible voter fraud.
— Monte Miller, The Missourian, 18 June 2020

Donors should fill out one form per type of donated item, and someone will reach out directly to coordinate a pickup. Donors can also state whether their items are unopened, as the criteria varies among hospitals and medical facilities.
— Johnny Diaz and Derrick Bryson Taylor, The New York Times, 1 Apr. 2020

Our word data, for example, began its life in English as the plural of the Latin-derived noun datum. A datum was a single piece of information, and data worked as a word for all of those pieces taken collectively.

The massed nature of data gave it a life of its own as a singular noun. Now when we encounter data in English, it occurs more commonly in the singular (“the polling data was released this morning”). The singular datum and the plural use of data still occur, but are rarer than singular data.

Another example to which criteria is often compared is agenda, which came to English as a plural for the noun agendum. Agenda referred to the list of things needing to be done, and a single item on that was an agendum.

Unlike data and agenda, however, criteria still shows use as a count noun (“here are three criteria”) alongside the emerging singular. Only time will tell if criteria will continue to show preference as the singular form over criterion.