One of the gripes lexicographers hear with regularity is that people don't use words precisely or accurately. Many such complaints, however, are guided by the assumption that we're the ones who should enforce precise usage (rather than what we really do, which is record the actual usage of words, even when that usage is considered wrong, loose, or otherwise... squishy).

We are nothing if not helpful, though, so we have taken one common set of words that people often ask about—couple, few, and several—and will offer below some general usage guidelines. 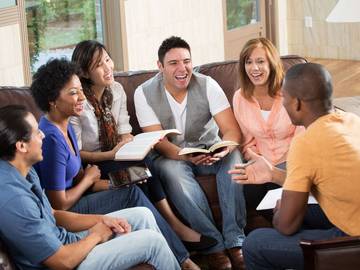 How many couples are in this stock photo search result for 'a few'? Several?

Couple first entered English as a noun in the 13th century, where it referred to two people linked in a romantic relationship. The word is from the Latin copula, which means "bond."

The word was quickly applied to pairs, but by the 1500s, it was also being used in the phrase a couple of to refer to an indefinite but still small number of people or things:

Point you out a Scholemaster, who by your order, shall teache my sonne and yours, and for all the rest, I will provide, yea though they three do cost me a couple of hundred poundes by yeare...
— Roger Ascham, The scholemaster ca. 1586

I shall here communicate to the World a couple of letters.
— Richard Steele, in The Spectator, 1711

We can verify that there were more than two letters that followed Steele's assertion.

Once this broadening of couple began, there was no holding it back. Couple is now understood primarily to refer to two when used as a bare noun ("they make a nice couple"), but is often used to refer to a small indeterminate of two or more when used in the phrase a couple of ("I had a couple of cups of coffee and now I can't sleep."). Its smallness seems to be relative: a quick check of our citation files reveals that the phrase a couple of years ago has been used to refer to everything from one year and change to eight years, though most of the time the phrase seems to be used of three or four years (when we can verify dates).

Verdict: couple is used of small numbers most of the time, but usually at least two or more.

Few is an old word, dating back to the 9th century. It has never been used of a definite number, unlike couple: from the very beginning, few was used of a comparatively small number.

The key word here is comparatively. Few is contrasted with many, but both are scalable quantities. For instance:

He arrived at the grotto a few days ago and asked his question, and since then he has been fasting in a holy cell while he waits for the answer.
— Zilpha Keatley Snyder, The Egypt Game, 1967

The "few days" here are describing two completely different numerical quantities. The King James Bible uses "few days" to mark out the span of a person's life compared to eternity; the excerpt from The Egypt Game seems to be referring to the small number of days that have passed since the visitor arrived and the narrative present. In neither case can you definitely say that few refers to a number between, say, 3 and 10.

To make matters more confusing, few also appears in the idioms not a few and quite a few, both of which refer to many:

Maria then said some really ugly things about Baltasar and not a few about Tony, and when she finally resumed speaking in a normal tone of voice, she used some very crisp language...
— Phillip Parotti, Texas Review, Spring/Summer 2014

or even the majority of a presented class:

Quite a few phrases built around fact--the fact that, in point of fact, and the fact is, for example--are attacked in various handbooks as wordy deadwood.
—Merriam-Webster's Dictionary of English Usage, 1986

Verdict: few is less than many or most, and could be as much as couple or more than couple. It's all relative.

Several came into English in the 1400s, but didn't develop its quantity meanings until the 1500s. (Several initially meant "distinct or separate" in English.) Yes, meanings: several originally referred to more than one.

They be but one heire, and yet severall persons.
— Edward Coke, _The first part of the institutes of the lawes of England _, 1628

In this sense, then, several is roughly the same as couple or few.

By the 1600s, however, several had come to refer to an indefinite number that was not large:

The current having forc'd the Ship upon the shore, where we were constrained to stay for several hours.
— Adam Olearius, tr. John Davies, The voyages & travels of the ambassadors sent by Frederick Duke of Holstein, to the great Duke of Muscovy, and the King of Persia, 1662

but could still be many:

Several young Men at the Universities, terribly possessed with the fear of Pedantry, run into a worse Extream.
— Jonathan Swift, A proposal for correcting, improving and ascertaining the English tongue, 1712

The many meaning is now primarily a dialectal use, fortunately. In use, the connotation of several is that it represents more than a few. We have one helpful citation in our files, sent there by a science editor:

When he looked at the planet Jupiter, Galileo found that it was accompanied by several small satellites or moons that orbited around it. [ed note: several=4 here].
— Stephen W. Hawking, A Brief History of Time, 1988

Verdict: in common use, several is often more than a couple and a few, though it is sometimes the same as both and occasionally more than a few. Phew.

We hope that not a few of you were able to make sense of it all.