Spelling variants are fossils of language

Word variants are the lingering evidence of language change. The coexistence of two or more spellings for words (which sometimes also show varying degrees of difference in meaning) are proof of the occasionally messy process of word formation; they can be like fossils left behind on a word’s path to acceptance in its modern form.

Some variants are obvious and can have meanings that both diverge and overlap, like further and farther (more often used to indicate distance) or antique (“old”) and antiquated (“obsolete”) or historic (“important”) and historical (“of the past”). 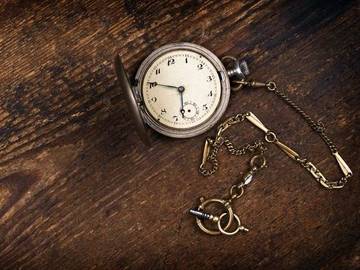 An antique piece of historical timekeeping.

Some are hiding in plain sight; they are used in different contexts and we don’t usually link them, though their connection becomes logical and obvious once you think about it in pairs like bereft and bereaved or insulation and isolation or delectable and delightful. They derive from shared roots which then grew in different directions.

Sometimes the coexistence is uneasy, with both words occupying similar semantic territory, as with academia and academe or feverish and febrile.

But true fossils are often evidence of disappearance; such is the case for the word cotemporary. Not contemporary, mind you: cotemporary. The meanings of the two words are the same, so the only difference is that they use different forms of the Latin-based prefix com-, meaning “with,” “together,” or “jointly.” Com- has several forms when used in English and combined with other words: com- before letters b (combine), p (compromise), or m (commingle); col- before the letter l (collinear); con- before other letters (like concentrate). But there’s also co-, as in coexist and coauthor, and it’s such a common prefix that we can understand cotemporary perfectly well today, even though the word has vanished from the language.

Cotemporary has the advantage of similar forms for its near synonyms coetaneous and coeval, both meaning “of the same or equal age, antiquity, or duration.” Coincident is another synonym, meaning “occupying the same space or time.” And, using different building blocks, a different Latin prefix gives us extemporary, a synonym of extemporaneous.

Cotemporary was the preferred form for lexicographers Samuel Johnson in 1755 and Noah Webster in 1828. Though they also had entries for contemporary, Webster makes his opinion clear in a note: “I consider this word as preferable to contemporary, as being more easily pronounced.”

Webster should have stuck to the facts, though: he also preferred ieland over island and the funny-looking bridegoom over bridegroom, and time has made these spellings look anything but contemporary.