Often has a medial /t/ that, like similar words such has "hasten" and "soften," was once pronounced and is now typically silent. Unlike the similar words, pronouncing the "t" in "often" has returned in some modern usage. This pronunciation is still scrutinized heavily and there is a divide between whether this is an educated or uneducated way of speaking.

There’s a \t\ in oftenplay , but how often do you hear it? As you might guess, the \t\ was pronounced in the past, when the word began as a variant of oft (also spelled ofte in Middle English), which was the more common form until the 1500s. Oft is now archaic for most of the senses of often, but is still used in compound adjectives like oft-repeated and oft-quoted. Ofttimes and oftentimes both carry that archaic flavor but are still in active use. After the -en suffix was added to ¬oft, the \t\ fell away in pronunciation, but remained in the spelling. 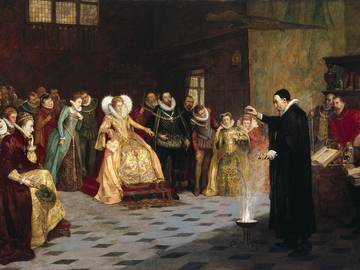 Henry Gillard Glindoni, "John Dee performing an experiment before Queen Elizabeth I." Though Queen Elizabeth did not pronounce the \t\ in 'often', most careful speakers in 17th century England did. Nevertheless, standard pronunciation seems to have followed the queen's example.

Similarly, the medial \t\ in words like soften, hasten, and fasten was originally pronounced, as the -en was added to base words that were recognizable (soft, haste, fast). Listen is a bit different; although the archaic verb list exists, listen comes from the Middle English listnen, and evidence is that \t\ after \s\ and before \n\ was not pronounced.

In often, the \t\ came back via a spelling-influenced pronunciation in the 1600s, as both literacy and printing expanded rapidly in England. E. J. Dobson’s authoritative work English Pronunciation 1500-1700 notes that Queen Elizabeth herself did not pronounce the \t\, but that phonetically spelled lists made in the 17th century indicate that “the pronunciation without [t] seems to have been avoided in careful speech.”

Nevertheless, the prestige or upper-class standard pronunciation seems to have followed the queen’s example, because three hundred years later, the first edition of the Oxford English Dictionary added this note to its entry for often:

The pronunciation (ȯf-tən), which is not recognized in dictionaries, is now frequent in the south of England, and is often used in singing.

And the 1934 unabridged Webster’s Second had this:

The pronunciation ȯf-tən, until recently generally considered as more or less illiterate, is not uncommon among the educated in some sections, and is often used in singing.

This note is curious—and dubious—for two reasons. It apparently judges the speaker rather than the word, to which it adds the irony that the criticized pronunciation in question is based entirely on the word's spelling. A person who uses this pronunciation would almost certainly be able to read.

The medial \t\ dropped out of many common words formed with -en, but came back in often. It is common today, but still stigmatized with the label ÷ in the dictionary; some educated speakers certainly do use it, but others consider it unacceptable. And they will often correct you.