One of our intrepid editors was listening to a broadcast which referred to someone as a "member of the press corps," and the broadcaster pronounced the word \KORZ\. This struck our editor as a little odd: isn't it usually "press \KOR\"? 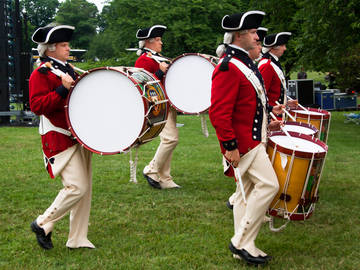 The Old Guard Fife and Drum Corps plays in Frederick, Maryland. Though 'corps' refers to a group, it's singular. 'Corps' also has a plural form, which is spelled exactly the same way, but pronounced differently.

Corps is a word that was borrowed into English from French, where corps means "body"—both literally (that is, anatomically) and figuratively (that is, to refer to a large group of people). When English lifted corps from French's pockets, we only took the figurative use: some of our earliest print evidence for the French borrowing in English is in regard to military campaigns and groups of soldiers. And though Noah Webster called it "an ill word in English" in his 1828 American Dictionary of the English Language, we've found it to be useful enough to keep around. Though it’s a word surrounded by some amount of confusion. How do you pronounce it? Is it singular, plural, or neither?

In French, corps in the "group" sense is singular, as in "one corps of the army." How do the French refer to more than one corps? With the plural of corps, which also happens to be corps.

When we took corps into English, we also took its Francophonic plural with it, which means that the English corps is both singular ("a corps of reporters") and plural ("two corps of reporters"). The problem is that the singular corps refers to a group, and so already feels plural to us: the Army Corps of Engineers, a corps of volunteers, the press corps.

In speech, when we refer to multiple corps, we pronounce the -s (\KORZ\). But in print, we have to rely on other context clues:

How can you tell if corps is singular or plural in a construction? Try substituting the word group for it to see if it makes sense. If it does, then that particular corps is singular. If not, then it's plural:

the Army Group of Engineers ✔

a group of volunteers ✔