An Overview of the Contronym 'Overlook'

If you're overlooking, are you watching or missing something?

A glance in any dictionary will show that the entry for the verb overlook has many senses, including one in which it is synonymous with supervise. Usage of this sense appears to be declining—and for obvious reasons. Consider this sentence:

The operators "overlook" the machines.
— Anglo-American Council on Productivity, Packaging, 1950

Take away the quotation marks and most readers will get an impression of distracted operators neglecting, or perhaps tripping over their machines, since "to fail to notice; to ignore" has long been established as the principal sense of overlook. 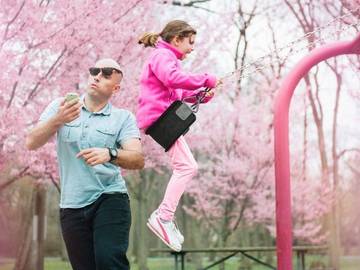 Overlooking one thing while perhaps overlooking something else

Nevertheless, the "supervise" sense is active in the language:

For him, it's been easy transitioning into the leader. He overlooks the underclassmen and tries to help everyone to the best of his ability.
— Mallory Merda, The Sentinel (Carlisle, Pennsylvania), 15 Feb. 2019

It also has presence in the noun overlooker, a British synonym of foreman (as in a "mill overlooker") as well as supervisor:

Speaking to Free Radio's Adam Wilbourn about her newfound friendship with Cheryl, the singer [Rita Ora] said: "Being on a panel with another female is amazing, especially with Cheryl being such a girls' girl, me and her really kicked it off straight away. … I’m really happy that I just get to have a laugh with someone that gets it. Obviously I have a good dear friend of mine already on there (Nick), and then Simon [Cowell] is just the overlooker!"
— Robyn Munson, Look, 18 Aug. 2015

Another sense of overlook is "to look over or through (something)," "to inspect." Like the word's "supervise" sense, this sense is only occasionally used due to the possibility of confusion with the much more common "not see" sense.

"You're not taking my digging stick?" Mrs. Vanderberg demanded with matriarchal pride when I had overlooked it. "Yes I am," was the quick reply. These sticks are used to dig bitterroot (the state flower of Montana), the fleshy roots of which are considered an Indian delicacy.
— Ralph T. Coe, Lost and Found Traditions, 1986

Paul Greene … got engaged to his longtime girlfriend, Kate Austin, in May. He popped the question during a romantic trip to Italy as they overlooked the city of Matera.
— Megan Stein, Country Living, 29 May 2019

The "watch" and "fail to notice" meanings of overlook make the verb a contronym (which is also spelled contranym)—or a Janus word, antagonym or autoantonym, all of which are synonymous. Some contronyms (such as peruse, which can mean "to read over in an attentive or leisurely manner") can be difficult to decipher, but we don't see overlook as being one of them. If you look over the context, you should be able to figure out how overlook is being used. However, if you are a learner of the English language, you might be momentarily puzzled as to the meaning of the word in the sentence you're analyzing.

Other challenging contronyms are ravel, which can mean "disentangle" or "entangle," and dust, meaning "to make free of dust" or "to cover with fine particles." Looking up the contronym in a Merriam-Webster dictionary (for those learning English, our website learnersdictionary.com is a great language resource) and substituting definitions in the context is our advice to grasping the meaning of the word. Just please don't overlook the word—look it up in our dictionary and build up your vocabulary. It'll help you prevent any oversight.