Chances are good that you've run into a conlang at some point in your life. If you've watched Star Trek or Game of Thrones, or read The Lord of the Rings, you've run into a few of them. Conlangs are "constructed languages" like Klingon, Vulcan, Elvish, Dothraki, and Valyrian. 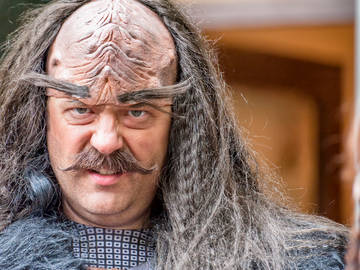 Conlangs like Klingon are created out of whole cloth, typically by one person. Many conlangers cite the 12th-century Catholic saint Hildegard von Bingen as the inspiration for their work.

Contrary to what some people think, a conlang is an actual language: they conform to grammatical rules, pronunciation rules, syntactical rules, and even morphological rules. For this reason, the most successful conlangs have been created by linguists who know how various languages (and language families) work: Mark Okrand (Klingon), Dorothy Jones Heydt (Vulcan), J. R. R. Tolkien (all the non-English languages in the books chronicling the history of Middle Earth), and David J. Peterson (all the non-English languages in the Game of Thrones TV shows).

Conlangs don't always come from fantasy novels or television shows. Hildegard von Bingen, the 12th-century Catholic saint and mystic, constructed an incomplete language she called Lingua Ignota (or "Hidden Language") that used a created alphabet and which was used for hymn lyrics. Though Lingua Ignota wasn't a proper conlang because our record of it is incomplete, conlangers (or enthusiasts and creators of constructed languages) consider Hildegard the medieval inspiration for their modern work. She wasn't the only early conlanger out there. In the 17th century, there was a fad for what were called "philosophical languages," or constructed languages that were supposed to right the wrongs of natural language. These philosophical languages were not widely used (in some cases, they weren't used at all), but they were attempts to reorganize language as a whole in a way that was logical and orderly.

Practical conlangs took off in the 19th century, when the idea of universal communication between cultures was in the air. You may have heard of one early and successful 19th-century conlang: Esperanto, a constructed language intended to be a second-language used specifically for international communication. Though few people speak Esperanto compared to Chinese or English, it is nonetheless the most widely spoken conlang in the world.

The word conlang itself isn't nearly as old as the thing it describes. Our first evidence of the word shows up in a Usenet post from 1991. Its etymological parent, constructed language, is a touch older: our first written evidence for constructed language used of an artificial language is from 1928. Though conlang and conlanger have been around for a few decades, they didn't see much general use until David Peterson won a contest held by the Game of Thrones showrunners to create languages for the series. The popularity of the show and of Peterson's story brought conlang to broader notice. Though it's not yet entered in our online dictionary, it likely soon will be.