It’s not always a matter of time.

Whether they are analog or digital, clocks are relied upon to do the work of measuring the passage of time. So when you clock something, you are measuring its time or its speed (essentially, its rate of movement within a certain span of time). You could be clocked driving 80 miles per hour in a 55 zone (whoops!), for example, or typing 70 words a minute (impressive!). 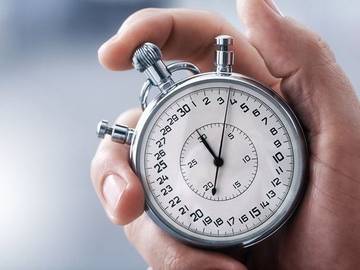 Do not do both of those things at the same time.

Once in a while, though, the measuring capacities of a clock gets stretched beyond time or speed into other areas, expressed by way of the verb phrase clock in:

And when they hit 100 proof or higher (one whiskey in this tasting clocked in at a palate-numbing 132 proof) the arguments for cask strength and above seem flimsy.
— Kara Newman, Wine Enthusiast, July 2013

Three days before the first game, without ever having gotten my body fat or height measured, I was told that "physical fitness standards" required me to weigh no more than 122 pounds. I hadn't clocked in at that weight since puberty (I'm 5 feet 3 and really muscular).
— Cosmopolitan, 20 Nov. 2015

Wade was more of a slasher, and only clocked in at a generous 6-foot-4, while Huerter is a more traditional swingman shooter, measuring in 6-foot-7, which is almost prototypical height for the position.
— Luis Paez-Pumar, Deadspin, 5 Mar. 2019

There's a lot in here, even though the book clocks in at a very unCaro-like 207 pages. The most surprising revelation: Caro, who has averaged about a decade between the publication of each volume of his LBJ series, is actually a pretty fast writer.
— Scott Detrow, NPR.org, 8 Apr. 2019

Some writing teachers or usage commentators might consider these examples to be mixed metaphors, since the devices used to measure alcohol content, weight, or height are not strictly clocks. But use of clock in the language of assessing things apart from time or speed is not an unusual concept.

Another use of clock applies it to places where one spends a duration of time as in the manner of fulfilling a sentence or requirement:

After that initial statement of purpose, Tweedy spends the rest of the album gracefully coming to terms with the things he can't control. (Dollars to donuts that the Serenity Prayer was hanging from the bathroom door of wherever he clocked his rehab.)
— David Marchese, Spin, July 2009

'Clocking' as Realizing or Understanding

Another sense of clock means to come to realize or understand.

Kiko's on a milk mission… He's clocked that one of the #elephants has a bottle & makes a beeline for it. Fortunately one of the Keepers is on the case, luring Kiko away with his own bottle! Find out more about the tallest orphan in our care: https://t.co/fKUYwlBTUA pic.twitter.com/ZTA0sAYpGV

The film was terrible, but people only clocked that a few months later, when Parker’s involvement in a sexual assault case came to light.
— Catherine Shoard, The Guardian, 30 June 2018

I also hadn’t clocked just how professionally damaging it would feel. When you are paid less it’s hard not to question your own ability and value to your employer.
— Sarah Montague, in The Press Gazette (UK), 9 Apr. 2018

This sense has been common in British English for a while, but is starting to see increased use in American English.

Viewers are immediately suspicious of the adults who show up in the home video footage (there’s just something off about that Uncle Larry), but Henry and Jacqui didn’t clock them as threats at the time.,
— David Ehrlich, IndieWire, 1 May 2019

Here’s another thing I hadn’t clocked in past performances: “Gone Missing,” though delightful, is a little thin. It seems to have been written by young people who are curious about loss rather than by older people — or different younger people — who are actually living it.
— Alexis Soloski, The New York Times, 12 July 2018

Even if he loses more often than he wins, the result has been a perpetual shock to the legal system and palpable harms to real people as the cases grind forward. But Tuesday night, the opposite seems to have happened: The soft power of legal norms and the warnings (or lack of enthusiasm) of his closest boosters, including his own White House counsel, seem to have spooked the president into standing down. That is how normal constitutional democracies function, but it’s been such a foreign occurrence in recent years, we almost didn’t clock it when we saw it.
— Dahlia Lithwick, Slate, 9 Jan. 2019

The use of clock to mean “notice” or “realize” seems to conflate the function of clocks with that of devices of detection, such as a smoke alarm or Geiger counter. The New Partridge Dictionary of American Slang attributes a date of 1929 to a sense meaning “to catch sight of or notice something or someone,” with later senses applying to gambling (watching opponents closely for tells in poker, for example, or keeping track of slot machines to predict when they will pay out). A particular use of clock pertaining to the trans community also carries that connotation of detection, referring to the action of recognizing another person as transgender. As Dawn Ennis notes in The Advocate, this action is regarded as hurtful within the community:

But for those of us in the trans world, the term “clocked” is used to reflect that someone transgender has been recognized as trans, usually when that person is trying to blend in with cisgender people, and not intending to be seen as anything other than the gender they present. "Clocking" is typically used by presentation-focused trans men and women to explain the crushing disappointment they feel, usually when cisgender people clock them, but also when someone trans does it. Another word is "read," as in "She read me," or "I got read as trans."
— Dawn Ennis, The Advocate, 4 Feb. 2016

Now we should probably stop watching the clock and get back to work.