Clean and cleanse both mean "to free something of dirt or impurities." Clean is used more generally to address everything from washing to tidying up. Cleanse is used more specifically to address removing dirt or germs, especially via washing, and is also used figuratively as seen in "cleanse the body/mind." 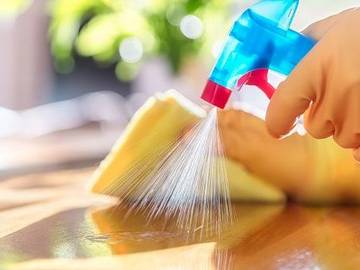 Both clean and cleanse mean to make something free from dirt or impurities. But while clean can be found in a range of general contexts, cleanse usually gets applied in more specific instances.

Differences Between 'Clean' and 'Cleanse'

You can use clean to mean simply “to make neat” (made the kids clean their rooms) or “to remove a stain or mess” (used a sponge to clean up the spill).

Clean your phone. Apple updated its care instructions to say that wiping the hard surfaces of a phone with 70% isopropyl alcohol is fine, as long as no moisture gets into any openings, keys, or charging ports.
— Arianne Cohen, Fast Company, 10 Mar. 2020

Cleanse often suggests the act of removing dirt or impurities primarily through the effort of washing. You might cleanse a surface with bleach, for example. You also might go on a special diet to cleanse the body of toxins, the nutrients essentially washing them from the body.

If you have a plastic or fabric base, be sure to cleanse it with a non-metallic scrub brush to prevent scratching.
— Deanna deBara, Martha Stewart Living, 18 Mar. 2020

Once gum disease is cleansed from the mouth, the bacteria will no longer spread throughout the body, thus improving the body's overall health.
— PR Newswire, 7 Jan. 2020

Figurative Use of 'Cleanse'

Cleanse often occurs in figurative contexts as well, with specific mention given of the thing being purged:

Her interactions with the community’s mediums and psychics include a ceremony to cleanse her home of a suspected ghost, a session of table talking in which the oak-legged furniture apparently dances around the room and an experiment in dowsing.
— Deborah Blum, The New York Times Book Review, 25 Oct. 2019

'Clean' and 'Cleanse' as Nouns

Similarly, both cleaner and cleanser can be used for a product or preparation that helps with cleaning. Cleaner tends to be preferred when dealing with that which removes a stain from a surface (glass or window cleaner) or laundry agents. On the other hand, the noun cleanser is more often used for a product like a scouring powder, which works to penetrate a surface (an abrasive cleanser). It’s also used for treatments that work on the skin (a facial cleanser).