If I'm clapping, don't clap back. 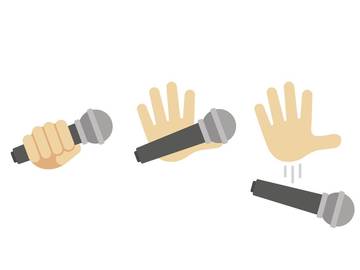 What exactly is a clapback?

Not to be confused with a garden-variety diss, a clapback is deemed by most as a targeted, often viciously acute comeback intended to place someone in much-needed check. …The goal of the clapback is to ?Shut. ?It. ?Down
— Aaron Edwards & Ira Madison III, BuzzFeed.com, 18 Feb. 2015

Clapbacks are now so much a part of our regular discourse online that even your humble dictionary has been accused of clapping back.

Clapback is a noun that derives from an earlier verb, clap back, which refers to the same thing: responding to a criticism with a withering comeback.

The term ultimately derives from a 2003 song by Ja Rule, appropriately titled “Clap Back.” The phrase is the meat of the hook (“Clap back, we gon’ clap back”), which answers what Ja Rule and his crew will do to rappers who disrespect them.

The song is a diss track, or a song written primarily to diss another rapper or a competing rap label. “Clap Back” is aimed at rappers 50 Cent and Eminem, and is just one of many diss tracks released in the beef between Murder Inc. Records (the label Ja Rule was on) and Shady Records (which signed 50 Cent and was owned by Eminem).

The clapping here isn’t literal. Ja Rule references another rap to explain what clapping back is:

All these wanksta snitches, let the nina [9mm handgun] blow kisses
If she somehow misses, he gon' meet the mistress
And "Clap that boy" like Birdman and Clipse.

“Clap that boy” is a reference to Birdman’s 2000 song “What Happened To The Boy?” (feat. Clipse and on the eponymous album Birdman), in which the boy in question snitched, and “we put a clap into that boy.”

You may think the clap in question is the well-known clap that means “a sudden blow.” It’s not. In this context, clap refers to shooting someone; the word refers to the sound of a handgun shot. It shows up in rap lyrics back to the early 1990s:

My lyrical format sounds off like gun claps…
— Redman, “Da Journee” on Dare Iz A Darkside, 1994

By 2000, clap wasn’t just referring to the sound of a gun, but to the act of shooting someone:

Clap whoever stand between Shawn and figures…
— Jay-Z, “Intro” on The Dynasty: Roc La Familia, 2000

A clapback, then, is return fire—whether literal or, as is more the case today and on Twitter, metaphorical: