The Long History of the Phrase 'Civil Rights'

What do we mean when we speak of civil rights?

On the surface this would appear to be a simple question, and we need look no further than to the dictionary definition. But on certain topics—and civil rights is one of these—many people are interested in more information than can reasonably be offered in a simple dictionary entry. 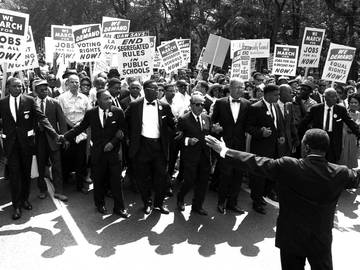 The term 'civil rights movement' is commonly associated with the 1950s and 60s, but the phrase is much older than that

The term civil rights likely entered the English language in the early 17th century. What is currently the earliest known use comes from George Chapman’s 1614 translation of The Odyssey in a prayer spoken by Telemachus:

Hear me, O Goddess, that but yesterday
Didst deign access to me at home, and lay
Grave charge on me to take ship, and inquire
Along the dark seas for mine absent sire!
Which all the Greeks oppose; amongst whom most
Those that are proud still at another's cost,
Past measure, and the civil rights of men,
My mother's Wooers, my repulse maintain.

It is evident that Chapman, and many of the other writers who used civil rights in the 17th century, were not using it in the politically tinged sense that we often use it today.

By the 18th century civil rights had taken on on the definition in Merriam-Webster’s Unabridged: “those rights the enjoyment of which does not involve participation in the establishment, support, or management of the government.” Following the enactment of the 13th and 14th amendments to the U.S. constitution, civil rights came to be frequently used to refer more specifically to the rights afforded by these amendments: freedom from slavery and freedom from being denied “life, liberty, or property, without due process of law."

In the presentation of this design, we know of no man more fitted for the work than the gentleman who has always represented Massachusetts in Congress, who was the foremost man in the so-called civil rights movement, which only failed of its full effect because the Democracy stood firm in resistance, united, undivided.
—The Daily American, 28 October 1880

Today, the phrase civil rights describes rights that guarantee to all citizens equal opportunities (as for employment, schooling, housing, or voting) regardless of race, religion, sex, or national origin.