A wine expert who helps you choose a bottle to go with dinner at a restaurant is called a sommelier. But in this golden age of craft beer, what is a beer expert called? Beer sommelier is certainly one option, and there is plenty of evidence for its use:

In the Taproom, the most popular restaurant in Chico, the waiters acted as beer sommeliers, helping us match the menu's wood-fired pizzas, rotisserie chickens and salmon steaks to the various porters, stouts, pilsners and pale ales.
—John Flinn, San Francisco Chronicle, 26 August 2001 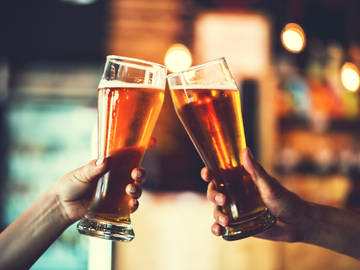 Who says a night of suds can't be fancy?

But the close association with wine and a very formalized certification program for sommeliers led beer expert Ray Daniels to create a parallel certification for beer, and he chose cicerone as the name for accredited beer professionals in 2007.

Cicerone has been used in English since the 18th century, meaning both “a guide who conducts sightseers” and “mentor” or “tutor.” Noah Webster included it in his dictionary in 1828:

CICERONE, noun A guide; one who explains curiosities.

The term was used by young upper-class British men who traveled to Italy on the grand tour to designate the guides who showed them the art and architecture.

Cicerone comes from the name of the Roman statesman Cicero, known for his skills as an orator and rhetorician. Cicero's reputation for eloquence and learning led to the use of the Italian version of his name, Cicerone, to refer to sightseeing guides. The name Cicero itself derives from cicer, the Latin word for chickpea. (Plutarch wrote that an ancestor of Cicero’s had a wart or facial deformity that resembled a chickpea and resulted in the odd family name, though this can’t be known for certain.) Cicer came to English via French in the 1300s as chich, the word that developed several centuries later into chickpea.

The certification term is trademarked and therefore supposed to be capitalized and marked with a circled “R,” but not everyone has gotten the memo, and there is ample evidence of generic use in print:

A group of certified beer judges and cicerones tasted each beer blind and gave each a 100-point score which was used to determine the ranking.
—Michael Russell, OregonLive.com, 1 July 2017

It's gotten praise for its strong, hoppy Imperial Red, but the low-key spot serves five other proprietary brews, along with a rotating cast of rare, fermented finds. It's a cicerone's heaven.
—Brooke Porter Katz, The Las Cruces Sun-News, 17 July 2017

We’ll be watching this new use of cicerone, derived from an ancient Roman name but with a modern meaning that hops from the Forum to the tap room. What is old is new again.