It's that thing at the bottom of your TV screen

Whether to promote other programs, give some backstory, or get viewers involved on social media, graphics and text show up more and more frequently on top of the shows on our TV screens. There’s a word for them: chyron. Although it's often used generically, it actually comes from the name of the company whose software allows television producers to add those crawling words, phrases, and images to their broadcasts. 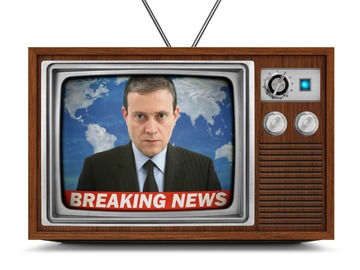 Here's a typical example of its use:

If you were driven nuts by the twenty-four-hour shouters, if you couldn't bear to watch any more flashing chyrons and Sam the Eagle gravitas, here was your catharsis. Like "Get Your War On," David Rees's post-9/11 comic strip, "The Daily Show" became a gathering place for the disenchanted – a place that let viewers know they weren’t crazy.

Chyron is pronounced \KIE-ron\ and is frequently seen lower-case. Early generic examples show attributive use, as a noun modifying another noun:

The names would be one more line on the chyron graphics that appear at video's end.

The chyron operator would then punch the stats into a control room machine used to generate the bar of information viewers see at the bottom of their TV screens.

Chyron is used frequently and in many different publications; it's a word that is likely to be added to the dictionary sometime soon.

If it is added, it will join the ranks of trademarks that have become established as generic terms. Some of these are easy to identify; think of Q-tip, Band-Aid, or Spam. Some become verbs (and therefore generic), like xerox or google. And some are barely remembered as trademarks today, such as heroin and granola.