How to tell these two commonly confused words apart

A cord is a long flexible string or rope, often made of thinner pieces woven together. A chord on the other hand is "three or more musical tones played together."

In 1948, the writer Paul Jennings coined a word, resistentialism, which may be defined as “the seemingly aggressive behavior on the part of inanimate objects,” or, in Jennings’ own words: “things are against us.” This word, intended to be humorous, has enjoyed sufficiently limited use that it is not found in many dictionaries (the Oxford English Dictionary first included it in 2010). Obscure it may be, but when one stops to ponder how often it appears that things are indeed against us, it becomes clear that resistentialism is a deeply useful word.

The nail that always sticks out of the floor and catches your toe? Resistentialism. 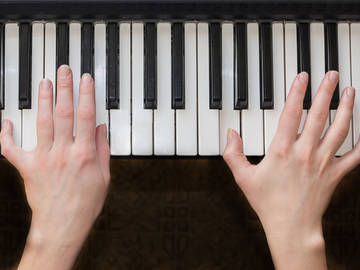 The 'cord' that means "string" comes from the Latin word 'chorda'. The 'chord' that means "a collection of notes" is an alteration of the Middle English word 'cord'. This may not be helpful in remembering which spelling corresponds to which meaning.

For evidence of our language’s antagonism towards its speakers, we need look no further than the words cord (“long, thin material that is usually thicker than a string but thinner than a rope”) and chord (“three or more musical tones sounded simultaneously”).

These homophones are occasionally confused by people, because homophones are confusing things (a homophone is “one of two or more words pronounced alike but different in meaning or derivation or spelling”). It often appears that the simpler the homophones are, the greater the difficulty in telling them apart; we still do not appear to have a collective handle on two, too, and to, and these forms have been fairly static for quite some time.

Origins of Cord and Chord

One useful way of distinguishing between two similar words is to remember some aspect of their origin. So let’s try that out with cord and chord, shall we?

Cord (the string) may be traced back to the Latin word chorda (meaning "catgut"). And chord (the collection of notes) is an alteration of the Middle English word cord. This is something that would, on initial inspection, appear to fall into the category of "unhelpful etymology." However, the fact that cord comes from chorda and chord comes from cord does in fact make sense, if we dig a little deeper.

The Middle English cord which gave us the musical chord is a shortening of the word accord (“agreement; as in opinion, will, or action”). It should be noted that there is also another sense of chord, which initially referred to a string on a musical instrument (and this is the chord we are referring to when we say that something "struck a chord with the audience"). This chord comes from the Latin word for "catgut." Yes, the same word that gave us cord (the piece of string).

Is this helpful? We hope it is, but recognize that the explanation may simply have muddied the waters for those who have trouble distinguishing between these two words. If this is the case you may, instead of relying on etymology, use the following mnemonic to help you: a cord is a single piece of string, while a chord is a group of notes — therefore the word which has more letters in it is the one for the collection of notes. That is as simple as we can make it, and just be glad we didn’t introduce cored into the matter.