That’s a spicy piece of meme-snark.

The Internet is a place where, for better or for worse, we are free to rate and react to things as they come to us. We rate things with hearts, with likes and smiley faces and thumbs-up emojis, and with smiley-faced emojis that have hearts for eyes. When we want more nuance, we might go for the perfect GIF that summarizes how we feel.

But if something is just an example of utter perfection, we might give it a chef’s kiss. 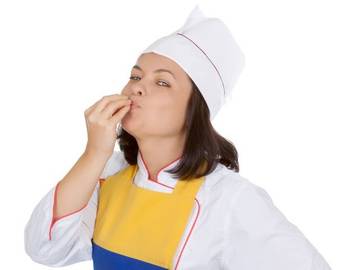 When it's as good as a kiss.

Currently seen all over social media, the chef’s kiss alludes to a gesture associated with chefs when they feel that a dish has been executed flawlessly. The gesture itself, as Jay Hathaway at The Daily Dot explains, is performed by “bringing [the] thumb and forefinger together, kissing them, and separating them again.”

The image of the chef’s kiss is used when one wants to say that something is perfectly appropriate—sometimes straightforwardly, but often with irony—and worthy of being savored in all of its snarky glory.

Both Hathaway and Joe Blevins, at The A. V. Club, have pointed to instances in popular culture where chefs—particularly Italian chefs—have been portrayed rather stereotypically as personalities who gush when they sample something great that they have created. The iconic image that expresses this wonder is the chef’s kiss, a gesture “of cartoonish delight,” Blevins writes, “as if the thing being reviewed couldn’t possibly be any better.”

That gesture, called al bacio (“as good as a kiss”), is one with sincere roots in traditional Italian culture. In American popular culture, however, the image of a chef giving the kiss of the fingers, as it is found on pizza boxes and cans of tomato paste, is a concoction of post-World War II advertising, and the use of the al bacio gesture perpetuated the stereotype.

You're likely to find chef’s kiss on Twitter, where both snark and brevity prevail. A common way to use the phrase is by enclosing it in asterisks, indicating that it is meant to be a gesture:

But as the phrase has escaped the constraints of Twitter and graduated to longer-form Internet prose, writers seem uncertain on just how to use it. Many still enclose it in asterisks, or some other setting-off punctuation (such as brackets), even in running text. Ostensibly, if one interprets chef’s kiss to mean “perfect” or “excellent” (as the gesture typically indicates) one would think it to be an adjective. And that’s how some use it:

But Silicon Valley is infamous for its solutions in search of problems, and its fixation with blood tests is a _chef’s kiss_ example.
— Rachel Becker, The Verge, 18 May 2018

With all the pieces set up in the first half, the second half is an ever-escalating, never-resting dance of mayhem; the longtime director James Burrows stages sequences that make you want to stand up and applaud, and the cast’s timing is [chef’s kiss].
— Josh Wolk, The New York Times, 18 May 2018

Others, based on the position of the phrase in the sentence, seem to prefer it as an adverb:

Chrissy Teigen is the gift to the internet we truly don't deserve, and in her latest brush with being _chef's kiss_ amazing, she went ahead and did an impression of Salt Bae. You know, him?
— Mehera Bonner, Marie Claire, 28 Feb. 2018

How about as a noun?

Also, the image of Tig, who is not known to have much of a physical shtick, doing self-satisfied leprechaun kicks down the street is truly a chef’s kiss of an act out.
— Erik Abriss, Vulture, 22 May 2018

Some are, like the actress Tavi Gevinson, 21, who reviewed the experience by bringing her fingers to her lips and smacking a “chef’s kiss,” and some may soon be, like Ms. Bernhard, whom Ms. Comey had never met, but invited all the same.
— Matthew Schneier, The New York Times, 6 Sept. 2017

If all else fails, you can place your chef’s kiss any random place and it will read like an interjection:

Look at the hand placement there. _chef's kiss_ Perfect shoulder grasp. Be careful not to place your hand too far up, as this is a sign of dominance and those with super fragile masculinity will feel attacked.
— Justin Kirkland, Esquire, 17 Apr. 2018

It's not really news when Donald Trump tweets about "fake news," but when what he says contradicts his own staff, _chef's kiss_ what a treat.
— Jaya Saxena, Elle, 7 Aug. 2017

That’s the kind of versatility that can make you smack your lips together and say, Mangia.