Our endorsement for each.

Cheque is the British English spelling for the document used for making a payment, whereas American English uses check. Check also has a number of other uses as a noun (e.g., a check mark, a hit in hockey, etc.) and as a verb ("to inspect," "to limit," etc.). 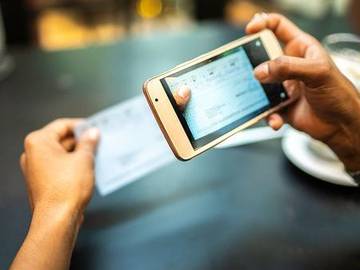 You can take this knowledge to the bank.

'Check' as a Noun

The word check has a wide range of meanings in English. As noun, it can refer to:

'Check' as a Verb

There is a similar diversity of meanings for the verb check:

The spelling cheque is associated with British English (used in Great Britain as well as the commonwealth countries such as Canada and Australia), but usually applies to one particular sense—that referring to a document for making a payment.

She took the cheque and the sheet of paper that he handed her. It was more than she had imagined possible.
— Alexander McCall Smith, The No. 1 Ladies’ Detective Agency, 1998

They lived for months in motels and rented warehouses; occasionally, Longo would forge another cheque to pay for a few weeks of grander accommodation.
— Benjamin Markovits, The Times Literary Supplement, 15 July 2005

Publishers will often amend the word’s spelling to check or cheque depending on the work’s intended audience. Idioms that are formed around the term are likewise styled:

Saudi Arabia and other Gulf countries should not write the generals a blank cheque just because they share a dislike of the Brothers.
— The Economist, 17-23 Aug. 2013

The program was no stranger to chequebook journalism, paying Barnaby Joyce and Vikki Campion reportedly as much as $150,000 to talk about their affair.
— Amanda Meade, The Guardian, 2 Oct. 2019

In the US, we often use check to refer to the document stating an amount due (as in "asked the waiter for the check"). In most British English publications, such a document is referred to simply as a bill.

The spelling cheque survives in particular uses with regard to other senses. Chequer was once the British name for a checkerboard or chessboard. The name Exchequer survives as the name of a government accounting office; its purported origin is the checkered surface of the table on which stones were maneuvered in calculations, much like an abacus. For the game played on such a patterned board using red and black disks, however, British English speakers eschew the term checkers for a completely different name: draughts.