Charlie Parker and the Language of Jazz

The etymology of bebop

Charlie Parker is famous for his role in the development of bebop music, which had an onomatopoetic name reflecting the short notes and off-the-beat rhythms characteristic of the genre.

The centennial of Charlie Parker’s birth falls on August 29, 2020. He is known first and foremost as one of the principal innovators of the modern jazz idiom known as bebop and he was one of the greatest improvisors in jazz.

Where Does 'Bebop' Come From?

The name bebop is simply imitative in origin: it came from a vocalized version of the clipped short notes that characterized the sound of this new musical language, which was often performed at fast tempos with off-the-beat rhythms reflected in the name bebop itself. 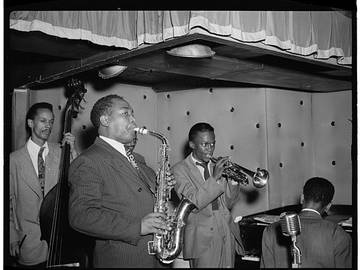 Bebop evolved from the swing music of the 1930s and early 1940s, and the term’s early uses date from that period:

[A]mong the ranks of bop fans facing East is linked as much with bebop as the goatee, glasses and beret.
— Jefferson City Post-Tribune, 8 November 1942

Naming something with a vocal imitation of a sound associated with it is called onomatopoeia, usually indicated in our dictionaries by the word “imitative” in the word’s etymology. Bebop was initially called rebop and some early recordings used rebop as part of the title of a song or part of the name of a group, such as “Charlie Parker’s Reboppers” (or “Ree Boppers”) used for record dates he made in 1945. It was later frequently shortened to bop, and a later development in the 1950s that had an earthier, more bluesy quality came to be known as hard bop.

Onomatopoeia as the origin of words is something that we associate with animals (moo, gobble) and actions (zoom, splash), but it is also a rich source of words connected to the sounds of speech (babble, chatter, jabber, mumble) and music (kazoo, gong, jingle, oompah, plink).

Indeed, scat, or singing with meaningless syllables instead of words, using the voice to sound like a trumpet or saxophone, is closely associated with bebop, and notable practitioners of this vocal art were Dizzy Gillespie and Ella Fitzgerald.

Charlie Parker and the Saxophone

Charlie Parker was one of the great virtuosos of the alto saxophone, often referred to simply as the alto. The saxophone is among the youngest of the wind instruments, dating to the 1840s, and blends the single-reed clarinet-style mouthpiece for producing musical vibrations with the louder projection of the brass construction of the trumpet or trombone. There is a whole family of saxophones that vary from small to large and known by the names of their register or tessitura, many familiar as names for identifying the voices of singers, notably the sopranino, the soprano, the alto, the tenor, the baritone, and the bass.

It was invented by and named for Adolphe Sax, a Belgian musician and tinkerer who also made a series of instruments that use the traditional trumpet-style cup-shaped mouthpiece called by the lesser-known name saxhorn. Some of these are still played today, referred to as the baritone horn or the fluegelhorn.

Charlie Parker’s nickname was Bird, shortened from Yardbird, which either referred to his fleet birdlike playing on the saxophone or a reported incident early in his career when he supposedly accidentally killed a chicken while driving a car when touring in the 1930s. The definitive etymology of this particular ornithology remains a mystery.