Where We Get 'Chanteys' (and 'Shanties')

Way hay and up she rises.

A chantey or shanty is traditionally a tune sung by sailors to unite them during the day's work. The words are likely derived from chanter—the French verb meaning "to sing"—and over history have grown in complexity to include clever rhymes and humorous themes. 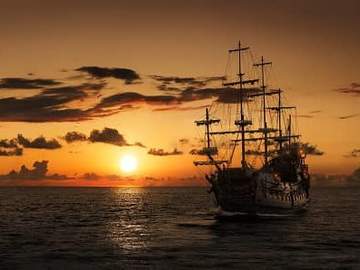 With many people continuing to live in isolation in the middle of a pandemic, the beginning of 2021 saw a rising trend of users singing and sharing sea chanteys, of all things, on the video app TikTok. Dating to the 19th century, the tunes were traditionally sung by sailors as a way to unite work crews and lighten the tedium of a day's chores, the rhythm of the songs encouraging the movements needed to complete tasks. Early chants were simple grunts uttered in rhythm to help multiple sailors time their movements to complete an action (such as hoisting something with a rope). Chanteys became more complex over time; many have clever rhyme schemes and humorous narratives attached to them, and some are noted for their ribald lyrics.

Classic literature is rife with tales of the sea, so it shouldn't be a surprise that chanteys make an occasional appearance in such tales:

Then, suddenly, he--for it was a man--swayed back, with a hitch to his skin trousers, and began to sing a chantey, such as men lift when they swing around the capstan circle and the sea snorts in their ears: Yan-kee ship come down de ri-ib-er, Pull! my bully boys! Pull! D'yeh want--to know de captain ru-uns her? Pull! my bully boys! Pull! Jon-a-than Jones ob South Caho-li-in-a, Pull! my bully. He broke off abruptly, tottered with a wolfish snarl to the meat shelf, and before they could intercept was tearing with his teeth at a chunk of raw bacon.
— Jack London, The Son of the Wolf, 1900

One explanation given for why TikTok is an ideal medium for chanties is that the songs are meant to be sung in unison, and the app includes a feature that allows one user to layer their voice on top of another's recording, creating a song that gets added to with every share. Popular chanteys include "What Shall We Do With a Drunken Sailor" and "Soon May the Wellerman Come."

Beyond the collective sing-along nature of the sea chantey craze, there’s something else: It’s catchy as hell. As much as it’s easily dueted on TikTok, it’s also an earworm. After you hear it once, you’ll be humming it for hours, even if you’re no longer scrolling your For You page.
— Angela Watercutter, Wired, 14 Jan. 2021 At the San Francisco singalong, many guests come with their favorite songs memorized. These span the lengthy history of sea chanteys across oceans, as well as across many generations of naval sailors and merchant marines. Many of the chanteys reference San Francisco specifically, owing to the seaside city’s historic Golden Gate strait and numerous cargo ports, including the infamous Gold Rush-era Barbary Coast district. —
Britta Shoot, Atlas Obscura, 30 Mar. 2018

The Navy Band embraced the current sea-shanty craze last week by modifying a Taylor Swift pop song into a whaling-style ditty. On Monday, they embraced the wave of Twitter critics who blasted the adaptation as a crime against music and good sense.
— Wyatt Olson, Stars & Stripes, 1 Feb. 2021

The dictionary shows two spellings for the word: chantey and shanty, though both likely derive from the same source: a modification of the French verb chanter, meaning "to sing." Our verb chant is another obvious derivative, and a number of other words derive from the predecessor to chanter, the Latin cantare.

The spelling shanty reflects the pronunciation of the French chanter. But English also has another word shanty, a noun referring to a crudely built shelter usually made of wood. It's believed that this word derives from the Canadian French chantier, referring to a lumber camp or hut. Sea shanty usually refers to the song, though one has encountered use of the word for the shelter as a seaside dwelling, which could conceivably influence how one spells the word:

One could, conceivably, sit in a shanty while singing a chantey (and drinking a shandy?), which would be one way to take chanteys to the next level. All in a day's work.