The amazing history of a common word

When we think of words that have been borrowed from other languages, we tend to first think of those that are fairly recent borrowings—words that look obviously foreign, like karate, cannoli, and sudoku. Older borrowings tend to hide under centuries of Anglicization; a word like platoon is the English version of the French peleton, and barbecue comes from the Spanish word barbacoa. 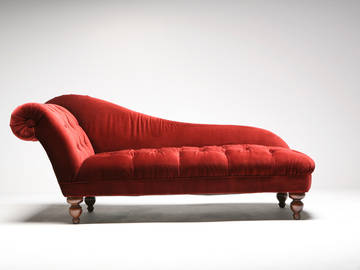 When English speakers imported a new kind of sofa from France in the late 1700s, they transformed the name 'chaise longue' ("long chair") into 'chaise lounge'—which makes sense, since 'lounge' is an English word spelled with the same letters.

Chaise lounge seems to be stuck in an intermediate stage of development, with its very French first word and much more comfortable second word. It turns out that English speakers, in a rush to find a cozy place to set down a name for a newfangled sofa imported from France in the late 1700s, transformed the name chaise longue (French for “long chair”) into chaise lounge. This kind of gravitational pull toward a more common word is known as folk etymology, or the transformation of an unfamiliar term to make it seem more familiar. Since longue is not an English word, but lounge, spelled with the same letters, is, it’s a natural choice for people seeking linguistic comfort.

But there’s more to this story: lounge also has a meaning in English that, coincidentally, is the same as the original chaise longue, “a long couch.” That makes the temptation to switch longue for lounge nearly irresistible. It’s clear from a comparison of the relative frequency of the use of both terms over time that chaise lounge is gaining on chaise longue in recent years, though a distinction is often recognized: chaise lounge is used more frequently for outdoor poolside, patio, or deck furniture, and chaise longue (or simply chaise) is used for indoor furniture.

Another coincidence is that lounge sort of looks like a French word, but it probably isn’t. In fact, we’re not certain of the word’s origin, though we know that it was first used as a verb. The Oxford English Dictionary posits that it might come from lungis, meaning “a tall awkward fellow,” implying that a tall person would need a long chaise, but that kind of just-so story sounds like folk etymology.

For those keeping score at home, that means that the French term borrowed into English that then blended with a similar but unrelated English term is sometimes pronounced as it would be in French. Just thinking about it makes us want to lie down to rest.