Centuries and How to Refer to Them

Imagine we're traveling through time, jumping ahead whole decades and winding up in an entirely new century. It's the year 2100, and we're at the dawn of the 22nd century. 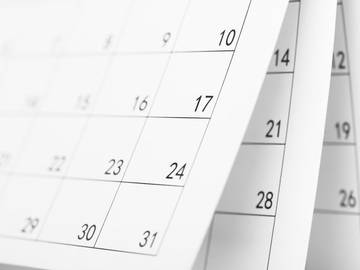 There's logic behind it, of course. The first century of the current era (aka the 1st century CE or AD) didn't start with 100; it started with 1 (more on the implications of that below). It wasn't until the second century, aka the 2nd century, that the years had a digit in the hundreds column: the year 150 was a century and a half into the new era, putting it smack-dab in the middle of the 2nd century.

AD (also styled A.D.), by the way, stands for "anno Domini," which is Medieval Latin for "in the year of our Lord." It's used to indicate that a year, century, etc., falls within the Christian era—that is, the period dating from the birth of Christ. AD is contrasted with BC (also styled B.C.), meaning "before Christ." CE and BCE (both also sometimes styled with periods) are also used for AD and BC, respectively, because they allow for a secular gloss. CE can mean "Common Era" or "Christian Era"; BCE can mean "before the Christian Era" or "before the Common Era."

*But back to those implications we mentioned above: will the years of the 22nd century really all start with 21? It depends on who you ask. Some people think the 22nd century will start January 1, 2100 and end December 31, 2199, with the 23rd century beginning on January 1, 2200. But there is a long history of people insisting that this is flat-out wrong for mathematical reasons: a century is by definition 100 years in length, and the first century started on January 1, 1, which means that when December 31, 99 rolled around only 99 years had passed; therefore, the first century of the current millennium didn't actually end until December 31, 100, and the second century didn't begin until January 1, 101.

This topic has proven to be vexatious especially at the turns of centuries, starting at the end of the 17th one, according to a Library of Congress article by Ruth S. Freitag called "Battle of the Centuries." There appears to have been quite a hubbub on the Continent over the matter in the late 1600s, and the British joined in on the next round:

We have uniformly rejected all letters, and declined all discussion upon the question of when the present century ends? as it is one of the most absurd that can engage the public attention, and we are astonished to find it has been the subject of so much dispute, since it appears to be perfectly plain. The present century will not terminate till January 1, 1801, unless it can be made out that 99 are 100. Eighteen centuries are 1800 years, then how can 18 centuries be completed till the year 1800 has expired? What is the meaning of a century, but a clear distinct series of 100 years? How can 100 be completed by 99?
— The Times (London), 26 Dec. 1799

For the same readership but two hundred years later, things had changed:

The world has voted with its cheque book in the debate on precisely when the millennium ends. While pedants continue to pit December 31, 1999, against the end of the year 2000, everyone who is anyone, it seems, has opted for the earlier date as the time to organise what they hope will be the mother of all parties.
— The Times (London), 2 Apr. 1991

Freitag notes that the 1991 article continues on "to report that a hotel, the construction of which had not yet begun, was already fully booked for that date, and points out that flying Concorde westward would enable revelers to ring in the New Year in several widely separated cities."

We assume there will be renewed debate on the matter in the late 2000s, and won't weigh in ourselves in the meanwhile.