Do you send in the ‘cavalry’ or the ‘calvary’?

How to remember the difference between these commonly confused words

On the battlefield, one should send in the cavalry, which is the word for an army component mounted on horseback. The similarly spelled word calvary however, refers to a depiction of the crucifixion, or, more recently, to an experience of usually intense mental suffering.

When you find yourself facing daunting circumstances and seemingly innumerable foes, do you figuratively sound the trumpets and call in the cavalry? Or do you decide to call in the calvary? If it is the former, you are on the right track, and we hope that help will soon come to your aid. If you opt for the latter, you have just made a request, which we hope will go unfulfilled, for someone to send you an experience of intense suffering. 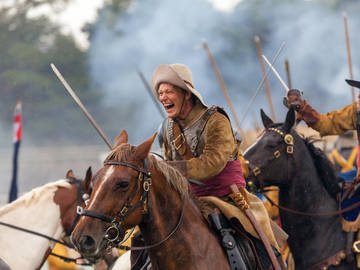 You're in trouble! Think quick: do you call in the cavalry, or the calvary?

Origins of 'Cavalry' and 'Calvary'

Although they begin and end with the same groups of letters, cavalry and calvary are not related in either origin or meaning. Cavalry (“an army component mounted on horseback”) comes from the Italian word cavalleria, which may mean either “cavalry” or “chivalry.” Two earlier meanings of cavalry in English, now both obsolete, are “horsemanship” and “knighthood.” In modern English the word can also refer to an army component moving in motor vehicles or helicopters and assigned to combat missions that require great mobility, or to horsemen.

Calvary was first used in our language over a thousand years ago, as the name of the place outside ancient Jerusalem where Jesus was crucified. This name comes to English from the Latin word for “skull” (calvāria). In the 18th century calvary began to be used with the meaning of “an open-air representation of the crucifixion of Jesus,” and then later took on the sense of “an experience of usually intense mental suffering.” The word as used to refer to the location of Jesus' crucifixion is capitalized, but in other uses the word is lowercase.

If you have trouble distinguishing between these two words, it may help to remember that the word dealing with horsemen has val in the middle of it. If you associate this word with the long-running comic strip Prince Valiant (who occasionally appears on horseback), you will make the correct choice.