A caucus is a meeting of members of a political group or party, usually to select candidates or discuss policy. Its meaning is straightforward, but the history of this word remains a mystery. It seems certain that it is an Americanism, and some have suggested a Native American origin or that it comes from “caulker’s meetings” among shipbuilders, but no definitive proof has been found.

Caucus is making its quadrennial appearance at the top of the lookups, as voters in Iowa cast the first ballots in the U.S. presidential election. The caucus is an important part of every U.S. presidential campaign, but the word can also refer to any group of people, usually politicians, who gather together to work towards some shared goal. Despite its significance, no one is completely sure where the term comes from—but it's definitely American.

Along with a few far-flung US island territories, only four states are still using the caucus system, with its two-part voting rounds and 15% "viability" cut-offs, to determine their Democratic presidential nomination contests. Iowa, of course, went first. We know how that turned out. Now it's Nevada's time in the spotlight (or, perhaps, the barrel).
— Anthony Zurcher, BBCNews, 23 Feb. 2020 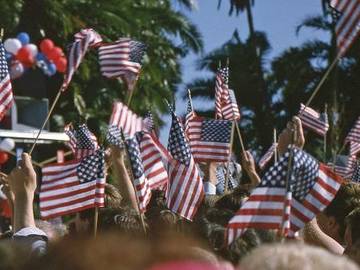 We have been trying to figure the origin of the word 'caucus' since shortly after we first began using it.

We have been trying to figure the origin of the word caucus since shortly after we first began using it. The earliest written evidence of the word is found in an advertisement in the Boston Gazette from May 5th, 1760:

And the said Committee of Tradesmen, do hereby exhort their good Friends, the Members of the old and true Corcas, who have from Time immemorial been zealously affected, to our ancient Establishment in Church and State, to behave at the ensuing Town Meeting with the usual Steadiness, and like honest Freeman to vote for WHOM THEY PLEASE.

Discerning readers will have noticed that, in the above text, the word caucus is cleverly disguised as the word corcas. One of the reasons that establishing the etymology of the word has been so difficult is that it many of the early users of it spelled it in different ways. John Adams, for instance, wrote in his diary in 1763 of having learned of meetings of the "Caucas Clubb".

Probably the first person to suggest an etymology for the word was John Pickering, who in 1816 published a book titled A Vocabulary, or, Collection of Words and Phrases , Which Have Been Supposed to be Peculiar to the United States of America. Pickering made the claim that the word originated in Boston (which may well be true), and that it was a shortened and corrupted form of the phrase caulker's meetings (caulkers were men who worked in the shipyards, water-proofing the hulls of ships). The suggestion has been reprinted in a large number of dictionaries, until well into the 20th century.

In 1872 Dr. J. H. Trumbull, an early specialist in Native American philology, suggested that the word might be derived from the Algonquin word caucauasu, which has the meaning of "one who advises". This is certainly a possible explanation, except that there has been a lack of any significant evidence since 1872 which would support it. Several dictionaries have sneered at this theory.

The next explanation offered came in 1889, when the editors of the Century Dictionary suggested that the word might come from the Late Latin word caucus, a drinking vessel, “in allusion to the convivial or symposiac feature of the Caucus Club.” This is probably a sneaky way for that dictionary to say that the members of the Caucus Club were fond of drinking.

The most recent, and probably least plausible, explanation for the origin of caucus comes from 1943, in a letter sent to the journal American Speech. The letter-writer claimed to have seen evidence in the papers of John Pickering (the man who was responsible for the "caulker's meeting" etymology) that the word caucus was an acronym, based on the initial letters of the last names of six men: Cooper, Adams, Urann, Coulson, a second Urann, and Symmes. This explanation has not gained much traction.

Most dictionaries today will offer a handful of these explanations, not committing to any, or will simply say that the origin is unknown. So for the time being we can treat these theories about this word as the linguistic equivalent of the field of presidential candidates we meet at the caucuses: there are more than we need, some are better than others, and rarely do we find ourselves satisfied with any.