The Ups and Downs of 'Carousel' and 'Carousal'

Around and around we go

Oh, that spell-check. What a jokester. People want to describe something as being like a merry-go-round, but they want a word that doesn’t sound quite so pleasant, so they turn to a synonym and type carousal. And spell-check says “this is fine,” because carousal is a perfectly appropriate word, syntactically speaking. But it’s not the word that refers to a (literal or figurative) merry-go-round.

Unless maybe it is. 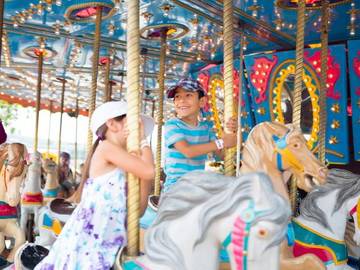 Hold on tight. It's a bumpy ride.

Which brings us to this year's SXSW festival in Austin. SXSW has long been a showcase for emerging technologies—an ever-changing carousal of progress that promises a week-long glimpse into how we'll live in the future.
— Seth Porges, Forbes, 14 Mar. 2018

Some of you may have snickered (or groaned) a bit there. A “carousal of progress”? A carousal (pronounced like “arousal” but with a “c” play ) is a wild, drunken party or celebration; a carousal of progress is what then? Maybe a group of "smart" appliances with arms and legs, downing shots of tequila and dancing on tables? We've seen Maximum Overdrive; we know how that ends.

The expected word in the quote above is carousel (usually pronounced \kair-uh-SEL\ play ), which can refer to the amusement park ride or to other things that go round and round, such as a circular conveyor (e.g., an airport luggage carousel) or a revolving case or tray for storage or display (e.g., a slide carousel). The phrase “carousel of progress” in the context above evokes a (sobering by comparison) series of high-tech inventions, one following another.

Carousel (also spelled carrousel) started its English life in the mid-17th century, when it referred to an exhibition in which troops of horsemen executed various movements to create arrangements—the modern reader may imagine synchronized swimming but medieval, on a field, and performed by costumed men on horseback. (Now there's a movie.) These carousels had by the mid-17th century largely replaced the jousting that used to happen at the tournaments of some more ancient yore. The word came to English by way of French, from an Italian word, carosello, which refers to a tournament in which contestants throw balls of clay at each other.

But here is where things get strange: carousal appears as an alternate spelling of carousel a few short decades after the latter came into use. The Oxford English Dictionary shows examples of carousal used to refer to the horsey shows throughout the 18th century and into the 19th. This use of carousal appears to actually predate the drunken revelry carousal (ultimately from the German gar aus, “all out”), which current evidence dates to the mid-18th century.

It’s for this reason that Merriam-Webster Unabridged includes an entry for carousal that is defined directly and without commentary as the exhibition kind of carousel (spelled carrousel). That entry has been included in the Unabridged since 1961. In the 1934 incarnation of the Unabridged the treatment was less charitable: carousal was reported to be “erroneous for carrousel.”

What was it that made the lexicographers responsible for the 1961 entry decide to enter carousal as an unstigmatized synonym of carousel? As always, evidence. Pesky evidence. They’d seen skilled writers—the likes of Walter Scott, for example—use it in published, edited text:

It is but too well known that the Saxons love not the Norman race, and who knows what may be the issue, if he break in upon them when their hearts are irritated by the death of Athelstane, and their heads heated by the carousal in which they will indulge themselves?
— Walter Scott, Ivanhoe, 1819

… I must own there is nothing I have regretted equal to taking this French journey. I looked for a splendid reception, tournaments, carousals, pageants, and festivals; instead of which, all has been seclusion and obscurity!
— Walter Scott, Quentin Durward, 1823

Sergeant Bothwell did not fail to take the lady at her word, and readily forgot the height from which his family had descended, in a joyous carousal, during which Mr Harrison exerted himself to produce the best wine in the cellar, and to excite his guest to be merry by that seducing example, which, in matters of conviviality, goes farther than precept.
— Walter Scott, Old Mortality, 1816

It wasn’t until the late 19th century that carousel began to be used to refer to the merry-go-round, which had been invented back in the 1720s. (The first merry-go-rounds were human- or horse-powered.) The carousal spelling follows the word into that territory as well: we have in our files a page from an old catalog—dated only as “c. 1880?”—on which a company advertising its “Constructions For Sea-Side And Summer Amusements” refers to itself as The New-York Carousal M’F’G company, and describes itself as “Manufacturers of Carousals of all sizes and kinds.”

Such evidence is compelling—professionals using a particular spelling for the very name of their business signals something about how widely accepted it is—but that evidence has not been joined by sufficient similar evidence to justify our entry of carousal as a variant spelling of the (literal or figurative) merry-go-round carousel in any of our dictionaries—yet.

It’s our business to always be looking for new words and spellings, as well as for old spellings and words making new inroads. Carousal as an established spelling of carousel is one we’ll be monitoring. It’s historically been too rare for anything but our unabridged dictionaries, and only common enough in its “exhibition” sense at that. You can use carousal in this alternate way in the meanwhile if you like—but be aware that those who haven’t read this article might giggle a bit when you do. As with all our articles, feel free to print it out and shove it in their faces.