Can You Use 'Comprised of'?

It's been in use for centuries. So, maybe.

Beginning in the early 20th century, a number of usage guides decided that there was something wrong with the way that some writers used comprise. The sense meaning "to be made up of" was fine ("the compound comprises seven buildings"), but the one meaning "compose, constitute," which is most familiar in the passive voice, was found objectionable ("the compound is comprised of seven buildings"). In the active voice, we clearly see that the meaning does in fact stand in awkward opposition to the "to be made up of" meaning ("seven buildings comprise the compound"). The Brothers Fowler made note of the construction comprised of in their book The King's English. Although the mention is quite brief, they appear to have, somewhat half-heartedly, suggested using composed of or comprising rather than comprised of.

Give-and-take forms, in which there are two words, with different constructions, that might properly be used, and one is given the construction of the other.
A few companies, comprised mainly of militiamen.—Times. (composed of? comprising?)
— H. W. Fowler and F. G Fowler, The King's English, 1907 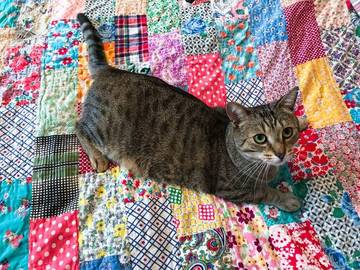 This was supposed to just be a picture of a quilt.

The "Rule" Around 'Comprised Of'

This restriction on the use of comprise may be neatly summed up by quoting usage writer Roy Copperud, who in 1970 averred "The whole comprises the parts; thus is comprised of is wrong." The combination of comprised with of is hardly new; although not the earliest sense of the word it has been in use for hundreds of years.

The third which is comprised of many and sundry (as suppose of many bodies comprehended vnder one name:) as the people, a congregation, an armie, a legion.
— S. R., The Choice of Change, 1585

Whereby they gather iudicially (according as Marsilius Ficinus, Censorinus, & Aulus Gellius doe testifie) that all the Septenary yeares, or those comprised of seauens; doe portend great alterations, changes; & impossible (as it were) that such tearmes can bee passed, without mighty hazzard, alteration of life, estate, health, or complexion. Vpon this occasion, the yeare seauenth, fourteenth, twenty one, twenty eight, thirty fiue, forty two, forty nine, and so for euery seauenth yeare, is to bee feared.
— Pedro Mexía, The Treasurie of Auncient and Moderne Times, 1613

Historical and Moderns Usage of 'Comprised Of'

It should be noted that simply having been in use for hundreds of years does not necessarily make a construction correct. However, it should also be noted that a body of writers deciding that a well established usage is wrong does not necessarily make a construction incorrect. There is considerable evidence of comprised of in well-edited publications throughout the 20th century:

...it was universally believed that mankind was comprised of a single species.
— Ashley Montagu, Man's Most Dangerous Myth, 1945

...a great many of the present-day centers are comprised of militant groups.
— Irving Louis Horowitz, Center Magazine, May 1969

And into the current century as well:

A nation comprised of 99% sea, the Maldives sees fishing not just an industry but as a way of life.
— Rosie Magudia, The Guardian, 30 Aug. 2013

Even if you despise comprised of and have made it your life's work to expunge it from the writing of others, chances are very good that you never approached the level of dedication exhibited by the Wikipedia editor who, over a period of years, deleted tens of thousands of uses of comprised of from that website (in addition to writing a 5,000 word explanatory article).

It seems safe to say that few of us have this level of animus towards any particular use of a word. Many people see nothing wrong with comprised of, although they still might feel apprehensive about using it, given that there are others who so strongly object to its use. If you are one of these apprehensive writers of comprised of we can offer you the following words from our Dictionary of English Usage:

Our advice to you is to realize that the disputed sense is established and standard, but nevertheless liable to criticism. If such criticism concerns you, you can probably avoid comprise by using compose, constitute, or make up, whichever fits your sentence best.